EUR/USD was gradually rising at the start of the current trading session but plunged after nonfarm payrolls had demonstrated growth that surpasses economists’ expectations. The news fueled talks about an interest rate hike from the Federal Reserve by the year end, though for now bets from speculators do not favor such an outcome.
Nonfarm payrolls rose by 255k in July, exceeding the forecast growth by 180k and the previous month’s revised 192k. The unemployment rate remained at 4.9% while forecasters had predicted it to fall a little to 4.8%. Average hourly earnings rose by 0.3% compared to the predicted increase by 0.2% and the June’s 0.1%. (Event A on the chart.)
Trade balance deficit widened to $44.5 billion in June up from $41.0 billion in May. That is compared to the median forecast of $42.1 billion. (Event A on the chart.)
Consumer credit rose by $12.3 billion in June from May versus the forecast rise by $15.5 billion. The previous month’s gain was revised from $18.6 billion down to $17.9 billion. (Event B on the chart.) 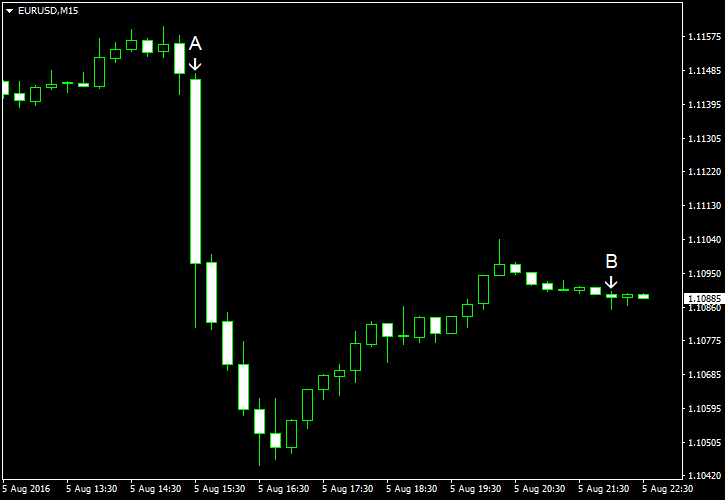