There was a huge number of economic reports released from the United States today, and many of them were bad. Yet that did not prevent the dollar to gain on the euro. September interest rate hike from the Federal Reserve is basically out of the picture, but plenty of traders continue to bet on monetary tightening in December.
Seasonally adjusted PPI showed no change in August while forecasters had promised growth by at least 0.1%. The index was down 0.4% in July. (Event A on the chart.)
Philadelphia Fed manufacturing index was at 12.8 in September. The reading was much higher than the forecast figure of 1.1 and the August’s 2.0. (Event A on the chart.)
Retail sales dropped 0.3% in August, more than analysts had predicted (0.1%). The July reading was revised from 0.0% to +0.1%. (Event A on the chart.)
Initial jobless claims were at the seasonally adjusted level of 260k last week, not far from both the previous week’s value (259k) and the consensus forecast (262k). (Event A on the chart.)
Current account deficit shrank to $119.9 billion (preliminary) in Q2 2016, matching forecasts exactly, from $131.8 billion in Q1 (revised from $124.7 billion). (Event A on the chart.)
NY Empire State Index was up from -4.2 to -2.0 in September. Nevertheless, it missed the analysts’ average estimate of -0.9. (Event A on the chart.)
Both industrial production and capacity utilization fell in July, failing to reach market expectations. Industrial production was down 0.4%. That is compared to the forecast drop of 0.2% and the June’s revised gain of 0.6%. Capacity utilization stood at 75.5% while experts had predicted it to stay near its previous level of 75.9%. (Event B on the chart.)
Business inventories (adjusted for seasonal variations) were unchanged in July. The actual data was different from the median forecast of a 0.1% increase and the June’s expansion by 0.2%. (Event C on the chart.) 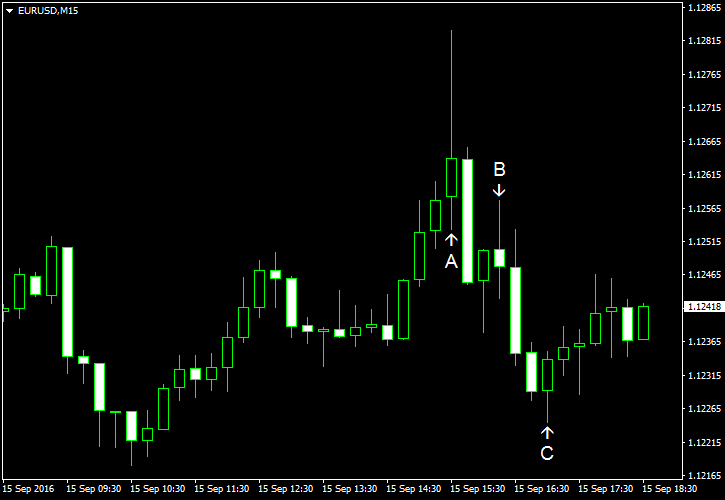