EUR/USD fell today, declining for the first day in five. One of the major reason for this was the general consensus that Hillary Clinton won the Monday’s presidential debate with Donald Trump, and that was considered a positive outcome for the dollar. Tuesday’s economic data from the United States also benefited the US currency, being strong for the most part (with the exception of the manufacturing index).
S&P/ home price index rose 5.0% in July from a year ago, almost at the same pace as in June (5.1%) and matching expectations. , the index was up 0.6%. (Event A on the chart.)
Flash Markit services PMI rose from 51.0 in August to 51.9 in September while analysts had expected it to stay about the same. (Event B on the chart.)
Richmond Fed manufacturing index improved a bit from -11 to -8 in September but failed to reach the average forecast figure of -2. (Event C on the chart.)
Consumer confidence climbed from 101.8 in August to 104.1 in September. It was the highest level since August 2007. Experts were nowhere near with their forecasts of a drop to 98.6. (Event C on the chart.) 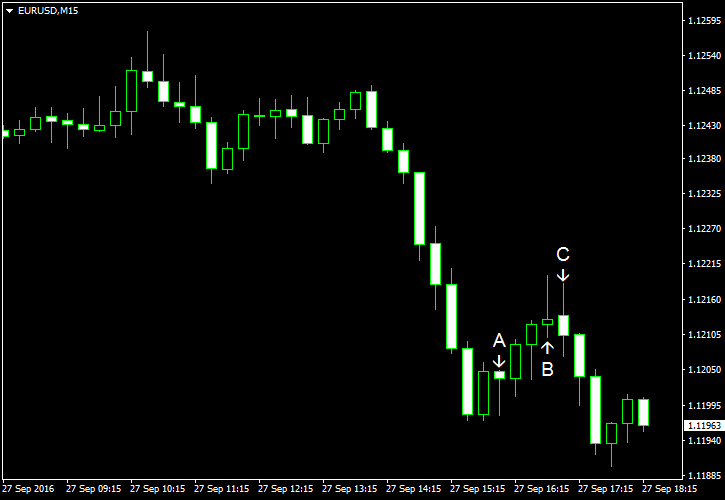