EUR/USD was falling today but started to recover intraday despite economic data from the United States that was coming out good. The possible reason for the bounce were easing fears surrounding Deutsche Bank. There are still concerns that Germany’s biggest bank may yet collapse, potentially creating a Lehman Brothers situation.
Personal income rose 0.2% in August, in line with expectations, after increasing 0.4% in July. Personal spending was unchanged versus the forecast increase by 0.2% and the previous month’s revised increase by 0.4%. Core PCE inflation was at 0.2%, matching forecasts and accelerating from the July’s level of 0.1%. (Event A on the chart.)
Chicago PMI advanced from 51.5 in August to 54.2 in September, far above the predicted level of 52.1. (Event B on the chart.)
Michigan Sentiment Index was up from 89.8 in August to 91.2 in September according the revised estimate. That is compared to the analysts’ estimate of 90.1 and the preliminary report that showed no change from the previous month. (Event C on the chart.) 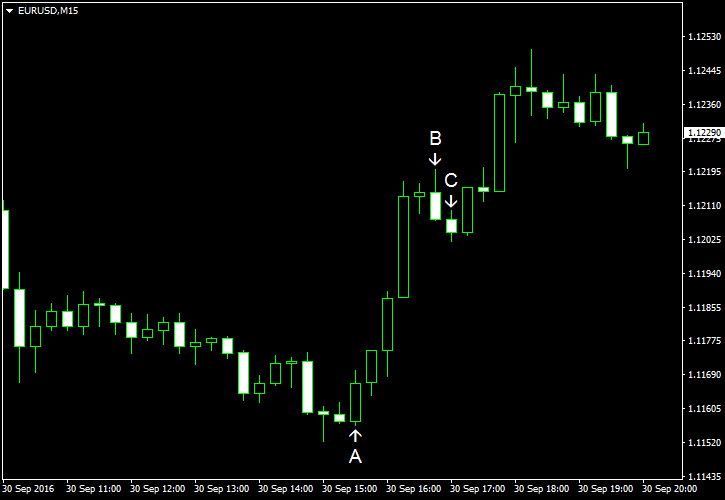