EUR/USD was flat today after the release of economic reports from the United States. Of a particular note was employment data from Automatic Data Processing, which missed expectations. That was not a good sign ahead of Friday’s nonfarm payrolls. Yet the dollar hardly paid heed to the data, continuing to draw strength from expectations of an interest rate hike in December.
ADP employment rose 154k in September. The actual increase was lower than the forecast figure of 166k and the previous month’s 175k. (Event A on the chart.)
Trade balance deficit was $40.7 billion in August, up from $39.5 billion in July. Forecasters had expected a bigger trade gap of $41.1 billion. (Event B on the chart.)
Markit services PMI climbed from 51.0 in August to 52.3 in September according to the final estimate. Analysts had predicted it to stay at the preliminary reading of 51.9. (Event C on the chart.)
ISM services PMI logged a huge gain in September, jumping from 51.4% to 57.1%. The median forecast promised a milder rise to 53.1%. (Event D on the chart.)
Factory orders rose 0.2% in August compared to the predicted drop by 0.4%. The July advance was revised from 1.9% to 1.4%. (Event D on the chart.)
US crude oil inventories fell by 3.0 million barrels last week instead of rising by 1.1 million as analysts had predicted, though the stockpiles stayed near the record levels for this time of year. The week before, the reserves shrank by 1.9 million. Total motor gasoline inventories gained 0.2 million barrels. (Event E on the chart.) 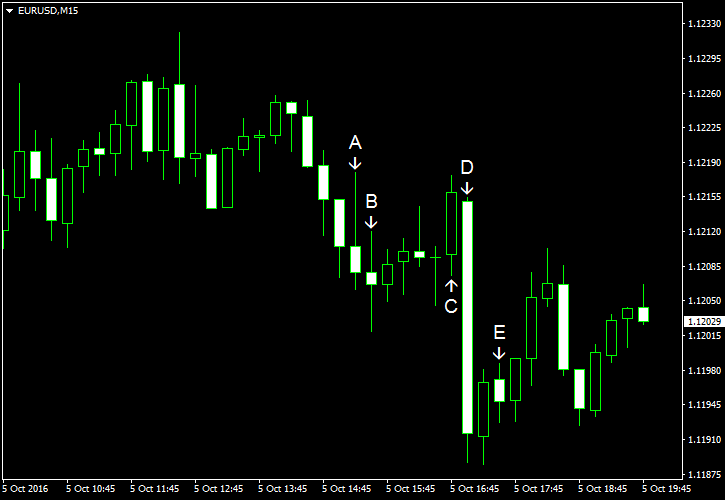