EUR/USD Rallies on Back of Worse-Than-Expected Nonfarm Payrolls

EUR/USD was falling today as traders were counting on solid employment data from the United States. Yet nonfarm payrolls came out below expectations, and the currency pair jumped sharply after the release. It attempted to retreat afterwards but managed to bounce, keeping its gains.
Nonfarm payrolls rose 156k in September, failing to reach the predicted growth of 171k. Meanwhile, the previous month’s gain was revised from 151k to 167k. Unemployment rate increased unexpectedly, rising from 4.9% to 5.0%. Average hourly earnings rose by about 0.2%, in line with expectations, after increasing 0.1% in August. (Event A on the chart.)
Wholesale inventories dropped 0.2% in August (seasonally adjusted) from July according to the final estimate while analysts had expected the same 0.1% as in the advance report. The stockpiles were unchanged in July. (Event B on the chart.)
Consumer credit rose by $25.9 billion in August after increasing by $17.8 billion in July. Economists had counted on a smaller increase by $16.8 billion. (Event C on the chart.)
Yesterday, a report on initial jobless claims was released, showing a drop from 254k to 249k last week. Analysts had promised the value to stay basically the same. (Not shown on the chart.) 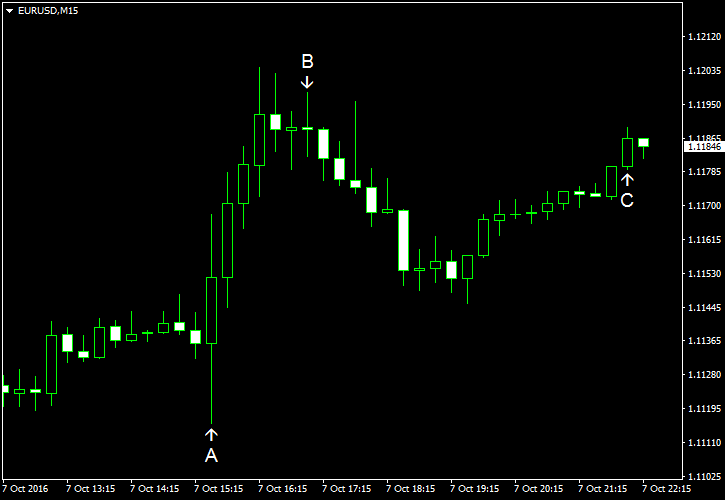