There were few US economic reports scheduled for the current trading session, but the ones that were released were disappointing, failing to reach market expectations. This allowed EUR/USD to edge higher today. One of the most important events this week should be the monetary policy meeting of the European Central Bank. Experts speculate that European policy makers may consider reducing monetary stimulus. While it will not necessarily happen on the coming meeting, the policy statement released after the event and comments of the bank’s chief will be closely watched by market participants for hints regarding further moves from the central bank.
NY Empire State Index fell from -2.0 in September to -6.8 in October. It was a total surprise to analysts who were expecting an increase to 1.1. (Event A on the chart.)
Both industrial production and capacity utilization rate missed expectations despite rising in September. Production was up 0.1% following the revised 0.5% drop in August. Still, it was a smaller increase than the predicted gain by 0.3%. Capacity utilization ticked up to 75.4% from the previous month revised rate of 75.3% but failed to reach the forecast level of 75.5%. (Event B on the chart.) 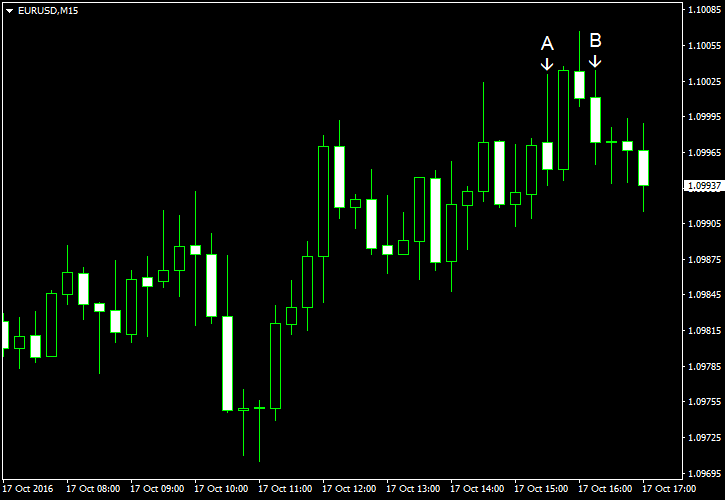