EUR/USD posted a significant intraday spike following a disappointing weekly US jobless data report combined with a mixed sentiment indicator. The currency pair rebounded during the next 15 minutes and went into a downtrend for 2 hours more, spurred by the  housing data from the United States.
Initial jobless claims rose from 247k to 260k during the last week. The growth exceeded the median forecasts of 250k claims. (Event A on the chart.)
Philadelphia Fed manufacturing index fell from 12 to 9.7 in October. Although the sentiment index decreased, it was above the forecast value of 5 and still remains in positive territory, which is a good thing for dollar bulls. (Event A on the chart.)
Existing home sales were at the seasonally adjusted annual rate of 5.47 million units in September — up from the August’s value of 5.3 million, and also well above the median forecast of 5.35 million. (Event B on the chart.)
US leading indicators increased by 0.2% in September after decreasing by 0.2% a month earlier. The current growth has been expected by the markets. (Event B on the chart.) 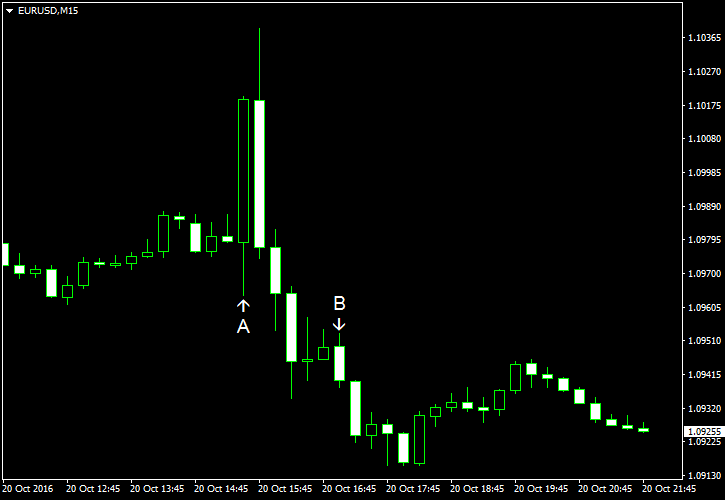