The dollar fell against the euro today while market participants continued to speculate about chances for an interest rate hike from the Federal Reserve in December. While the general consensus is that the Fed is going to hike rates, that outcome has already been priced in. Any doubts, on the other hand, have potential to hurt the currency badly. Saying that, the greenback’s drop was limited, and the US currency is currently trying to regain its footing against the euro.
Wholesale inventories rose 0.2% in September according to the preliminary estimate after falling at the same rate the month before. Analysts had predicted a smaller increase by 0.1%. (Event A on the chart.)
Flash data showed that Markit services PMI was up from 52.3 in September to 54.8 in October. Forecasters did not predict any significant change for the index. (Event B on the chart.)
New home sales were up to 593k in October from September’s 575k, but the increase was the result of the downward revision of the September’s figure from 609k and was still smaller than the predicted rise to 601k. (Event C on the chart.)
US crude oil inventories fell by 0.6 million barrels last week (and were near the upper limit of the average range) instead of rising by 0.7 million barrels as experts had predicted. The stockpiles shrank by 5.2 million the week before. Total motor gasoline inventories fell by 2.0 million barrels last week but remained well above the upper limit of the average range. (Event D on the chart.) 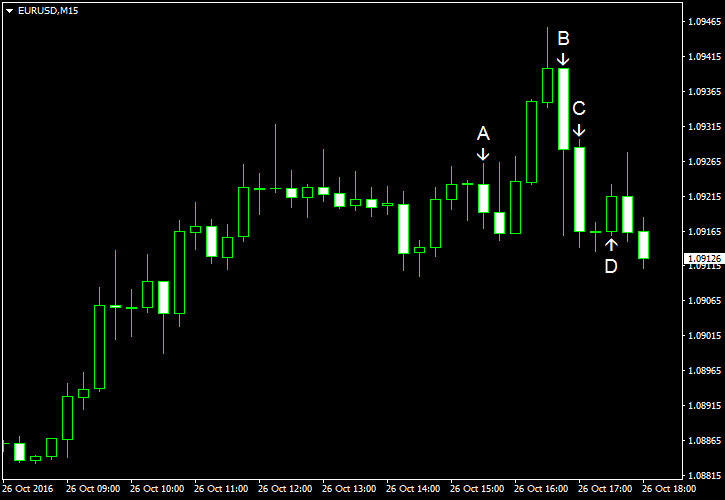