The US dollar continued to strengthen against the euro today as the greenback received some support from improving macroeconomic indicators.
Durable goods orders added 4.8% in October following 0.4% increase in September (revised positively from 0.1% loss). Market analysts pointed at 1.7% increase for October. (Event A on the chart.)
Initial jobless claims rose from 233k to 251k last week, in line with the median forecast of 250k. (Event A on the chart.)
Markit manufacturing PMI rose from 53.4 in October to 53.9 in November according to the preliminary report, slightly ahead of the forecasters’ 53.6 number. (Event B on the chart.)
New home sales were at 563k in October — down from 574k in September (revised from 593k) and short of 590k forecast. (Event C on the chart.)
Michigan Sentiment Index was at 93.8 in November according to the final report. This reading was above the preliminary value of 91.6. (Event C on the chart.)
Crude oil inventories lost 1.3 million barrels during the week ending November 18. The loss followed a gain of 5.3 million barrels a week earlier. Market participants expected a small gain of 0.3 million barrels. Total motor gasoline inventories added 2.3 million barrels during the same period after reporting a gain by 0.7 million barrels a week earlier. (Event D on the chart.)
The Federal Open Market Committee of the US Federal Reserve has released the minutes of its November meeting signaling readiness to start raising the interest rates soon (event E on the chart):

Based on the relatively limited information received since the September FOMC meeting, participants generally agreed that the case for increasing the target range for the federal funds rate had continued to strengthen. 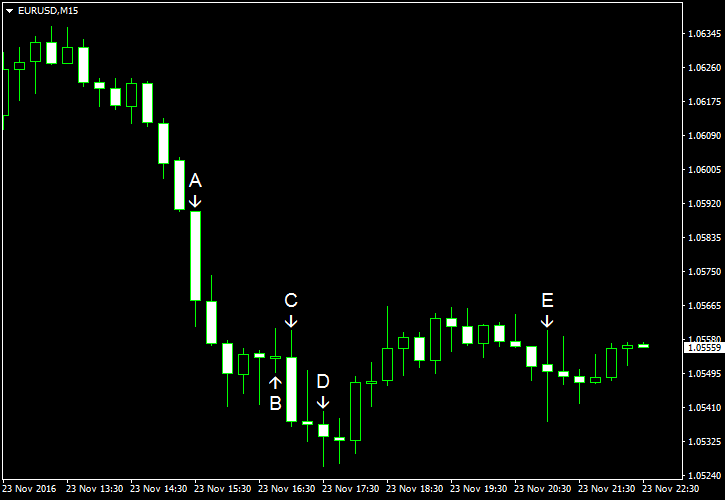