US economic data released today was good for the most part, with the exception of unexpectedly rising jobless claims. Yet that did not help the dollar to hold its ground versus the euro. EUR/USD was rising during the current trading session, and while the currency pair pulled back intraday, it managed to stage a rebound. Now, traders wait for tomorrow’s nonfarm payrolls — the most important report ahead of Federal Reserve’s policy meeting on December 15. Market participants count on an interest rate hike during the gathering.
Initial jobless claims climbed from 251k to 268k last week while analysts had predicted them to stay almost unchanged at 252k. (Event A on the chart.)
Final Markit manufacturing PMI rose from 53.4 in October to 54.1 in November — the best reading in more than a year. Experts were anticipating the same 53.9 figure as in the preliminary estimate. (Event B on the chart.)
ISM manufacturing PMI climbed from 51.9% in October to 53.2% in November, far exceeding the median forecast of 52.1%. (Event C on the chart.)
Construction spending rose 0.5% in October from September, a bit less than analysts had predicted (0.6%). The September’s reading was revised to 0.0% (no change) from a 0.4% drop. (Event C on the chart.) 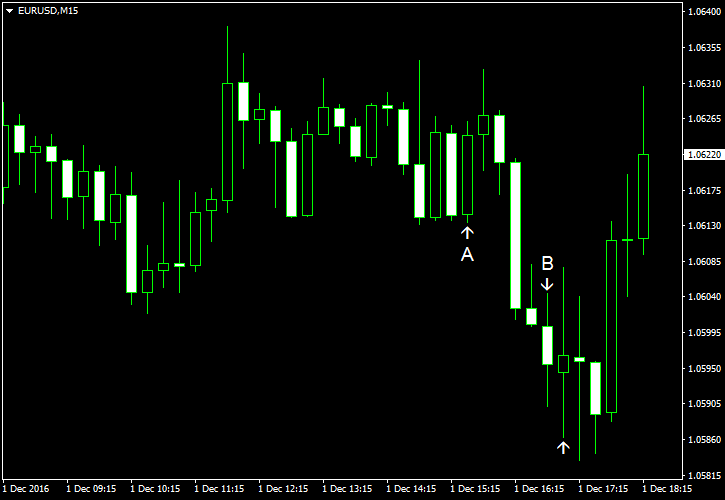