Currency trading is by and large carried out in the OTC () market. Lack of a central regulatory authority has given rise to numerous Forex brokers with offices in exotic locations. A large section of the retail traders depend on these Forex brokers to trade currencies from the comfort of their home. While it just takes a few minutes to open a real account, the quality of a broker can be understood only when the trader faces some problem. For the majority of traders, the online chat with the customer support executive is the best available option during difficult times. This is followed by the feedback and contact forms provided by most of the FX brokers. Where time is of essence, communications via email is considered as the last choice by retail traders. The customer support facility undeniably forms the backbone of a Forex broker. So, we made a sincere attempt to assess the online brokers based on the quality of their customer support.

The aim of the post is to find brokers that are able to provide timely, accurate, and honest answers. At the same time, we will try to expose brokers with inadequate level of support service — either in response speed or in the answer quality.
Methodology
To assess the customer support facility of so many Forex brokers in an effective and balanced manner, we followed the norms detailed below:

Survey details
We made an attempt to contact as many as
241 Forex brokers in a three week period.
We were able to chat with the customer support executive or senior staff of 126 companies. This includes the chat support staff who answered to at least one question or stated that they cater only to clients trading in some other markets.
The customer executives of 61 Forex brokers were busy with other clients when we made an attempt to chat with them. In such cases, we were requested by an automated messaging system to leave our queries for them to respond as early as possible.
Reasons for no chat with support service
Customer support executives were busy or not available online
10Markets, ATC Brokers, ADS Prime, BCapitalsFX, BTFX, Bulbrokers, CM Trading, eToro, Exness, FastBrokers, ForexYard, Formax, , Gallant Capital Markets, Dukascopy, Global Futures, Hadwins, iForex, IG, Infinity Space Inc, JCMFX, Larson & Holz IT, LCG, LQDFx, MFX Broker, MTrading, NetoTrade, Oanda, Pepperstone, RFXT, RoboForex, SolForex, Spread Co, SynergyFX, TeleTrade, TempleFX, TenkoFX, TMSBrokers, Trade360, Tradeo, TradewiseFX, UMOFX, Varianse, Vector Securities, VertiFX, Vinson Financials, and ZARFX.
Chat only in foreign language
, ATIG, NAS Broker, and NewForex.
Technical problems
AL Trade, Core Liquidity Markets, SunbirdFX, TMS Brokers, and Xtrade.
No response even though the operator had received the question
FxNet
Chat serves other purposes
Interactive Brokers, SimpleFX, TenkoFX, and TradeKing.
No chat facility — only Skype
1BillionForex, FCI Markets, PFD, Renesource Capital, and Vomma Trading.
Contact form
As many as 37 Forex brokers had no chat facility at all (or at the least we were unable to find it). So, we contacted them through online form.
Forex brokers without chat facility:
ACFX, Advanced Markets, BDSwiss, Bestec NFX, Bolmax Management, Citypoint Trading, CMC Markets, DirectFX, ETX Capital, Euro Pacific Bank, Finam, Finotec, FIPFX GLOBAL, FOREX UKRAINE, ForexCT, Forexite, FXRANEX, FXTSwiss, HMS Markets, HYCM, IfamDirect, Key To Markets, MahiFX, Price Markets, Realtrade, , Romanov Capital, SaudiQuote, Sucden, TFI Markets, Trade Fintech, TraderNovo, Velocity Trade, Vistabrokers, Whaleclub, XGLOBAL Markets, and You Trade FX.
As many as 34 brokers did not provide a feedback or details request form. At the least, it was not available in the Contact Us section. The statistical data also includes those brokers whose online form is not working or has some other restrictions (number of words, for example). So, we sent an email to the support department.
Reasons for not using online form
Query form is not available in the Contact Us section
AFX Capital, AL Trade, , Alpari, BelforFx, CMC Markets, ETX Capital, Finam, Finotec, FIPFX GLOBAL, ForexCT, Forexite, Gallant Capital Markets, HMS Markets, IfamDirect, Key To Markets, MahiFX, NetoTrade, Realtrade, Renesource Capital, RFXT, Romanov Capital, SaudiQuote, Saxo Bank, Vomma Trading, Whaleclub, and XGLOBAL Markets.
Technical problems
1BillionForex, CornÃ¨r Trader, DirectFX, NewForex, , Romanov Capital, TenkoFX, and TFI Markets.
For  traders only
SaudiQuote
Response
Whenever we failed to reach the online customer support executive (if they were available), we sent the query through the online form. If there is no response to the message sent via online form, then we made at least two attempts to communicate with the broker through email. To our disappointment, 47 of the Forex brokers did not respond to us at all. The statistics does not include PhillipCapital.
Reasons for not responding
Reason unknown
1BillionForex, BCapitalsFX, BelforFX, Citypoint Trading, CMC Markets, DirectFX, ETX Capital, Finotec, FIPFX GLOBAL, ForexCT, ForexYard, , FxNet, FXRANEX, Forex Ukraine, FXTSwiss, IfamDirect, iForex, IG, Key To Markets, MFX Broker, NetoTrade, Questrade FX, , Saxo Bank, SunbirdFX, TeleTrade, TMSBrokers, TraderNovo, Vector Securities, VertiFX, Vistabrokers, and Zar FX.
Technical difficulties on broker’s website
ACFX, FX Dana, Hadwins, and Bestec NFX.
Cater to different markets
Advanced Markets, , ATIG, NAS Broker, Romanov Capital, SaudiQuote, and You Trade FX.
Other 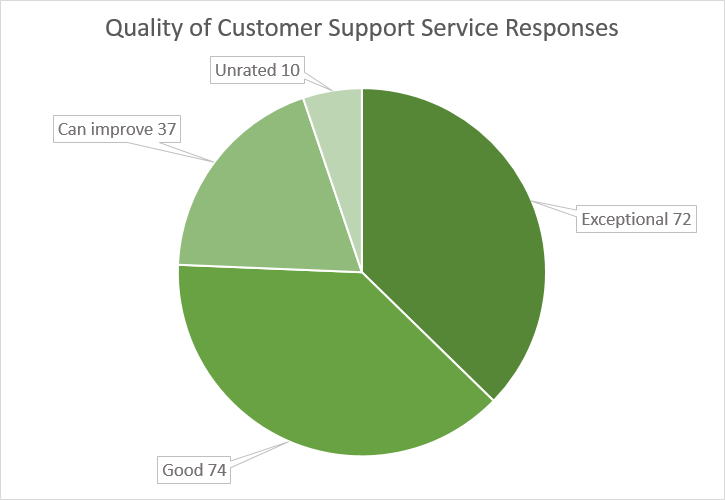 Conclusion
The customer support executives of FX Giants (Rijo Varghese), FXCH (John), FXFINPRO Capital (Viktor), IC Markets (Dorina), and JFD Brokers (Antonia) deserve an appreciation for their lightning fast response.
In the same manner, FXDDâs customer care executive (Marina P.) also deserves a round of applause for the good knowledge she has about order routing. She was very polite as well. The chat support executives of FXOptimax (CS18) and FxPro (Yuri) provided the clarification in a detailed manner. Likewise, Dun Li, the chat support executive of Hantec Markets, clearly stated that in a real market, it is impossible to totally protect an account from negative balance during periods of high volatility. The customer support executive of FxGrow (Jennifer) was exceedingly polite and deserves appreciation.
Surprisingly, few brokers excelled in our customer service survey. As you can see, only FXDD and FxPro are companies. It might be due to the fact that smaller broker see a better support service as a competitive advantage they can use against industry giants. And, considering the recent regulatory actions, it might soon become the only way for brokers to compete for new traders in Europe.
A top class customer support department speaks volumes about a Forex broker. However, it is just one aspect of trading. A trader should choose a Forex broker based on a range of parameters and in accordance with the personal needs and objectives.
If you want to share your a story about your experience with Forex brokers’ customer support service, please use the commentary form below to do so.