The dollar gained on the euro on Wednesday after the speech of US President Donald Trump that he delivered to the Congress overnight. Yet the greenback backed off later, losing almost all of its gains by now. US economic data was unable to provide support to the greenback as today’s indicators were rather mixed.
Personal income and spending rose in January. Income increased 0.4% after rising 0.3% in December. Spending was up 0.2% following the increase by 0.5%. Forecasters predicted gain by 0.3% for both indicators. They also predicted the same rate for core PCE inflation, and this time they were right as it indeed was at 0.3% compared to 0.1% in the previous month. (Event A on the chart.)
Markit manufacturing PMI slipped a bit from 55.0 in January to 54.2 in February. It was close to the reading of 54.4 predicted by analysts and the preliminary estimate of 54.3. (Event B on the chart.)
ISM manufacturing PMI climbed from 56.0% in January to 57.7.% in February. Forecasters promised just a minuscule gain to 56.2%. (Event C on the chart.)
Construction spending slumped 1.0% in January from December instead of rising 0.7% as experts had promised. On a more positive note, the December reading was revised from a drop by 0.2% to an increase of 0.1%. (Event C on the chart.)
Crude oil inventories expanded by 1.5 million barrels last week, matching forecasts exactly, after increasing 0.6% in the previous week. Total motor gasoline inventories shrank by 0.5 million barrels but were above the upper limit of the average range for this time of year. (Event D on the chart.) 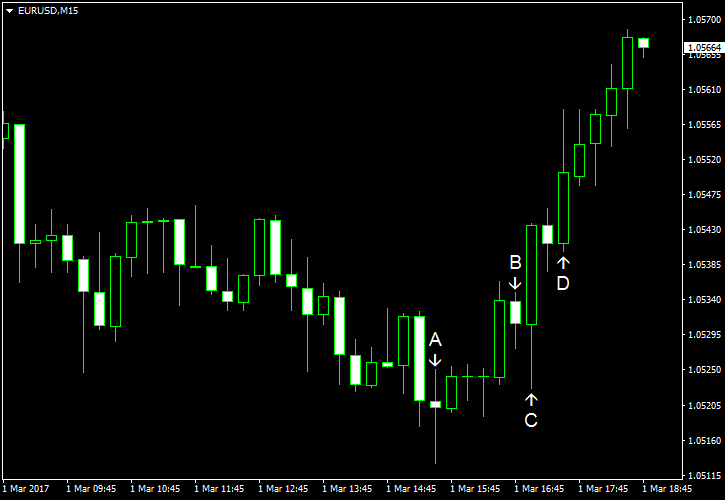