EUR/USD Down After Fed & Set of Solid US Indicators

EUR/USD dropped today as US economic indicators were rather solid for the most part, with employment rising in line with expectations and the services sector improving much more than experts had anticipated. The currency pair demonstrated an especially sharp drop after the Federal Open Market Committee decided to keep its monetary policy unchanged and issued a statement that was largely neutral but with some hawkish remarks.
ADP employment demonstrated a growth by 177k in April from March, basically matching economists’ expectations. The March increase was revised from 263k down to 255k. (Event A on the chart.)
Markit services PMI advanced from 52.8 in March to 53.1 in April according to the final reading. Analysts expected the index to be the same as the preliminary estimate of 52.5. (Event B on the chart.)
ISM services PMI jumped from 55.2% in March to 57.5% in April, exceeding the specialists’ average estimate of 56.1%. (Event C on the chart.)
Crude oil inventories decreased by 0.9 million barrels last week, far less than experts had predicted (3.3 million), and were near the upper limit of the average range for this time of year. Total motor gasoline inventories increased by 0.2 million barrels last week and also were near the upper limit of the average range. (Event D on the chart.)
FOMC left the federal funds rate unchanged at the 0.75%-1% range, surprising no one. (Event E on the chart.) The Committee made some hawkish remarks in its statement, using the word “solid” when describing job gains and growth and consumption. The statement also mentioned the slowing economic growth in the first three months of this year, saying that “the Committee views the slowing in growth during the first quarter as likely to be transitory.” The FOMC did not reveal anything new about its plans for the future, stating: 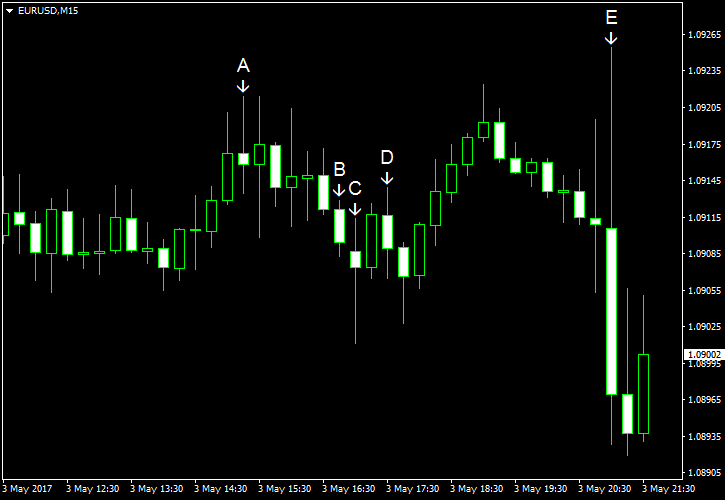