EUR/USD rallied after the French election debate between the two candidates for presidency. Analysts considered that Emmanuel Macron emerged as a victor, increasing his chances to become a president after the second round of voting this weekend. Economic data from the eurozone was also helping the currency pair, being good for the most part. US macroeconomic indicators were not bad either, but that did not prevent the euro from gaining on the dollar.
Initial jobless claims dropped from 257k to 238k last week, below the 246k level predicted by analysts. (Event A on the chart.)
Nonfarm productivity decreased at a 0.6% annual rate in Q1 2017. That is compared to the expected increase by 0.1% and the previous quarter’s revised increase by 1.8% (1.3% before the revision). (Event A on the chart.)
US trade balance logged a deficit of $43.7 billion in March, little changed from $43.8 billion in February, whereas experts were expecting a wide gap of $44.9 billion. (Event A on the chart.)
Factory orders rose 0.2% in March, failing to meet market expectations of a 0.6% increase. The February gain was revised from 1.0% to 1.2%. (Event B on the chart.) 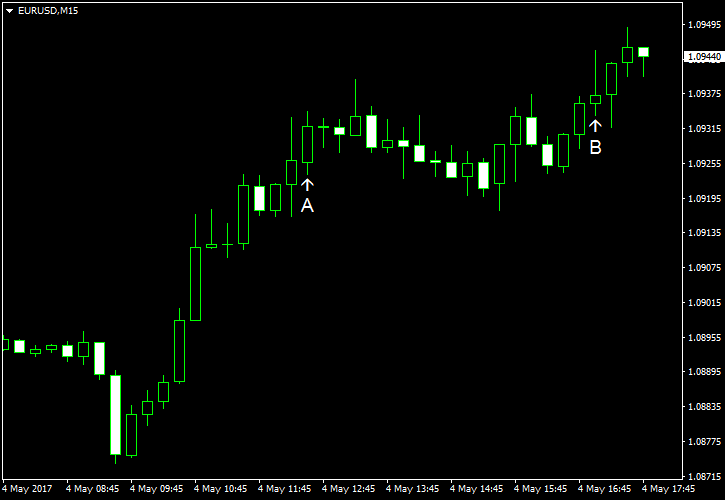