The US dollar dropped abruptly against the single European currency today following a the release of the consumer inflation and sales data from the United States. EUR/USD rally was but strong. Minor US reports that had been released afterwards were ignored by market participants.
US CPI increased by 0.2% in April, matching forecasts, after posting a 0.3% drop in March. At the same time, core CPI (excluding food and energy) rose by mere 0.1% — below forecast 0.2%. , CPI was at 2.2% with its core components at 1.9%. (Event A on the chart.)
April retail sales were reported with a growth of 0.4% vs. 0.6% expected by the markets. March sales change was revised from a fall by 0.2% to a growth by 0.1%. (Event A on the chart.)
Preliminary report on Michigan Sentiment Index has shown an increase from 97.0 to 97.7 in May. Traders expected it to stay unchanged at its previous level. (Event B on the chart.)
Business inventories increased by 0.2% in March, matching the median forecast. Meanwhile, February growth of 0.3% was revised to 0.2%. (Event B on the chart.) 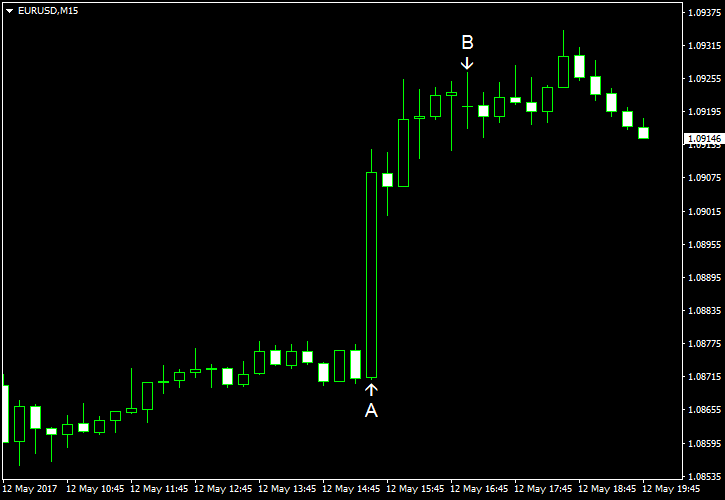