EUR/USD declined today following four consecutive sessions of gains as US economic data released over the current session was surprisingly good for the most part. It allowed the dollar to overcome the impact of US politics. Yet the troubles have not ended yet as Reuters reported that people involved in Donald Trump’s campaign had at least 18 undisclosed contacts with Russians during the Presidential election. That added to controversies surrounding Trump that may lead to his impeachment.
Initial jobless claims slid to 232k last week from the previous week’s unrevised level of 236k instead of rising to 240k as experts had forecast. (Event A on the chart.)
Philadelphia Fed manufacturing index climbed from 22.0 in April to 38.8 in May. And again, forecasts (which had predicted the index to stay almost unchanged) turned out to be wrong. (Event A on the chart.)
Leading indicators rose 0.3% in April, the same as the downwardly revised increase in March, while forecasters had predicted a 0.4% rise. (Event B on the chart.)
Yesterday, a report on US crude oil inventories was released, showing a drop by 1.8 million barrels last week, which was smaller than a 2.5 million drop predicted by analysts and the 5.2 million slump registered the week before. The stockpiles remained in the upper half of the average range for this time of year. Total motor gasoline inventories decreased by 0.4 million barrels but were above the upper limit of the average range. (Not shown on the chart.) 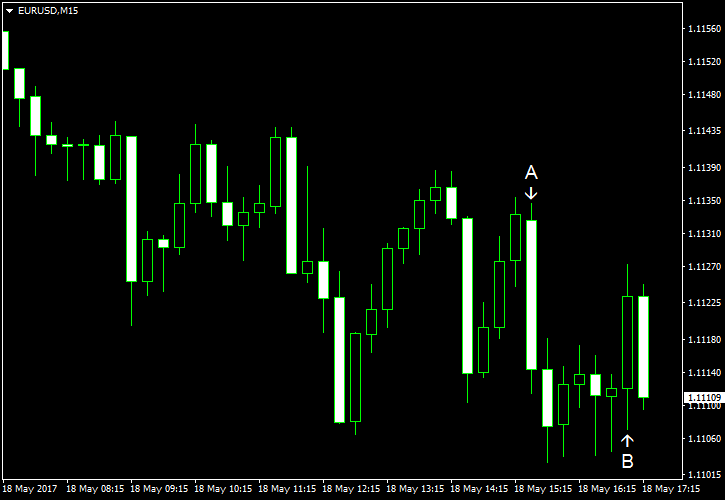