EUR/USD was rising today and extended its move up after employment data from Automatic Data Processing missed expectations. The currency pair paused its rise after the US services sector demonstrated strong growth.
ADP employment rose by 158k in June, seasonally adjusted, failing to reach the 184k figure promised by analysts. Furthermore, the May growth was revised from 253k to 230k. (Event A on the chart.)
Initial jobless claims rose from 244k to 248k last week while specialists expected them to be little changed. (Event B on the chart.)
Trade balance deficit was down from $47.6 billion in April to $46.5 billion in May, in line with expectations. (Event B on the chart.)
Markit services PMI rose from 53.6 in May to 54.2 in June according to the final estimate. Experts anticipated the same 53.0 reading as in the preliminary report. (Event C on the chart.)
ISM services PMI rose from 56.9% in May to 57.4% in June instead of falling to 56.5% as economists predicted. (Event D on the chart.)
US crude oil inventories slumped by 6.3 million barrels last week but remained in the upper half of the average range for this time of year. That was a far bigger drop than a decline by 2.4 million predicted by analysts. The stockpiles were up by 0.1 million the week before. Total motor gasoline inventories declined by 3.7 million barrels last week but were near the upper limit of the average range. (Event E on the chart.) 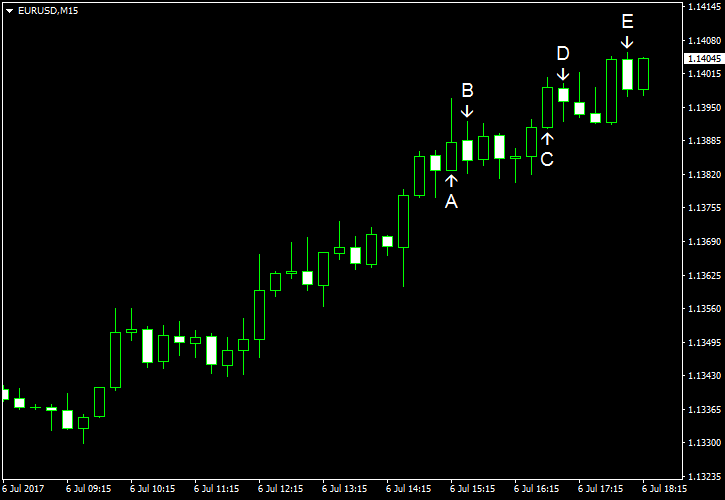