EUR/USD Stable After Mixed US Data

EUR/USD was stable today following mixed economic releases from the United States. Yesterday’s testimony from Federal Reserve Chairwoman Janet Yellen was dovish, but that did not prevent the currency pair from falling during the previous trading session.
PPI rose 0.1% in June while experts had anticipated it to stay unchanged, the same as in May. (Event A on the chart.)
Initial jobless claims were at the seasonally adjusted level of 247k last week. The number was close to the forecast 245k and the previous week’s 250k. (Event A on the chart.)
Treasury budget deficit widened from $88.4 billion in May to $90.2 billion in June instead of shrinking to $36.2 billion as forecasters had predicted. (Event B on the chart.)
Yesterday, a report on crude oil inventories was released, showing a drop by 7.6 million barrels last week after logging a 6.3 million drop the week before. Total motor gasoline inventories fell by 1.6 million barrels last week. (Not shown on the chart.) 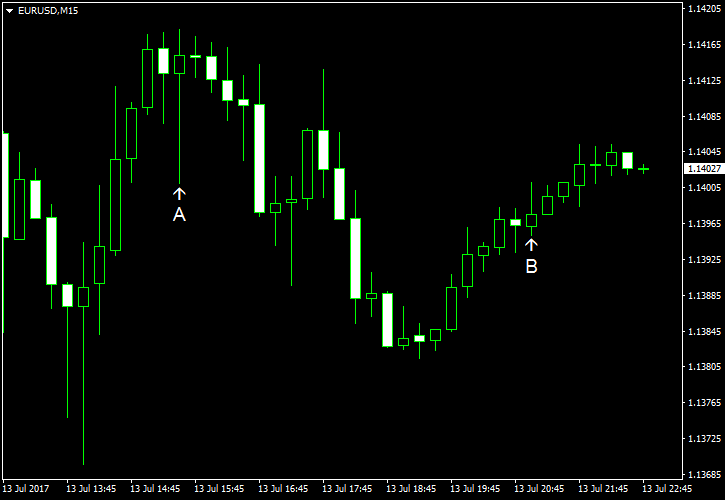