EUR/USD Volatile on Mixed US Data

EUR/USD traded up and down during the current session as the markets have been moved by mixed macroeconomic data. However, currently, the US dollar is trading a bit stronger versus the euro compared to the daily open level.
US nonfarm productivity added 0.9% in the second quarter of this year as opposed to 0.1% seen in the first quarter (revised up from no change). Traders expected a 0.7% increase for this indicator. (Event A on the chart.)
June wholesale inventories rose by 0.7% compared to 0.6% forecast and 0.6% May change. (Event B on the chart.)
Crude oil inventories decreased by 6.5 million barrels during the last week. The drop followed a 1.5 million barrels decline a week earlier and was much deeper than 2.2 million barrels negative changed predicted by analysts. Total motor gasoline inventories added 3.4 million barrels during the same period. (Event C on the chart.)
On Monday, a report on consumer credit has been released in the United States. It showed a growth by $12.4 billion for the month of June compared to $18.3 billion gain a month earlier. Forecasts had been pointing at $15.8 billion growth. (Not shown on the chart.) 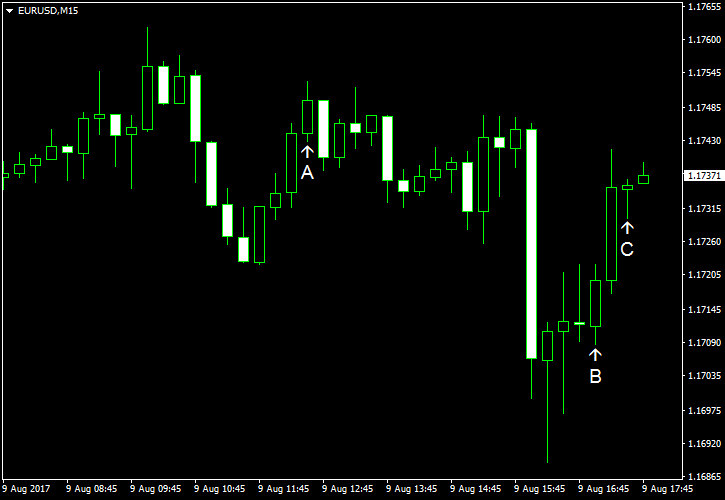