EUR/USD reversed its movement yet again, basically changing its direction every day of this week. The currency pair gained today as the dollar was hurt by the comments of the US President Donald Trump. Economic reports released in the United States during the current session also contributed the drop of the greenback, being disappointing for the most part (with the notable exception of the services indicator).
Flash Markit manufacturing PMI dropped from 53.3 in July to 52.5 in August, while experts had anticipated it to stay little changed at 53.4. Flash Markit services PMI, on the other hand, climbed from 54.7 to 56.9, exceeding the analysts’ average projection of 55.0. (Event A on the chart.)
New home sales were at the seasonally adjusted annual rate of 571k in July, below the June’s revised figure of 630k (610k before the revision). Specialists predicted a reading of 611k. (Event B on the chart.)
US crude oil inventories dropped by 3.3 million barrels last week, exactly as forecasters had predicted. Despite this week’s drop and the previous week’s steep decline by 8.9 million, the stockpiles remained in the upper half of the average range for this time of year. Total motor gasoline inventories decreased by 1.2 million barrels but were near the upper limit of the average range. (Event C on the chart.) 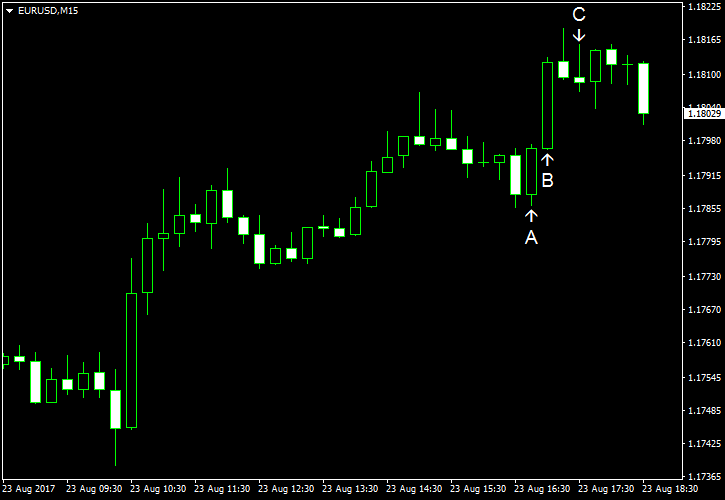