EUR/USD Declines After Amazing US Data

The dollar rallied versus the euro today after two major economic reports released in the United States turned out to be surprisingly good. Meanwhile, US stockpiles of crude oil continued to shrink even as Hurricane Harvey caused many refineries to halt, limiting consumption of US oil.
ADP employment climbed by 237k in August, outpacing the previous month’s growth of 201k (revised up from 178k). The median forecast promised an increase by just 185k. (Event A on the chart.)
Second (preliminary) estimate showed that US GDP rose by 3.0% in Q2 2017. That is compared to the prior estimate of 2.6% and the forecast increase by 2.7%. The US economy expanded by 1.2% in Q1. (Event B on the chart.)
Crude oil inventories shrank by 5.4 million barrels last week and were in the middle of the average range for this time of year. The drop exceeded the predicted 1.8 million and the previous week’s 3.3 million. Total motor gasoline remained unchanged near the upper limit of the average range. (Event C on the chart.) 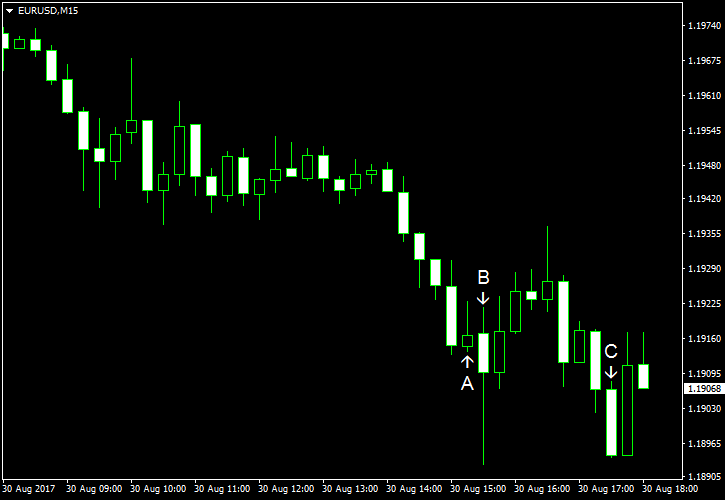