EUR/USD dropped intraday during the current trading session after the report that the European Central Bank is concerned with the strength of the euro. Nevertheless, the currency has rebounded by now. As for US economic data, it was mixed, without any big surprises.
Initial jobless claims were at the seasonally adjusted rate of 236k last week. It was almost the same as the previous week’s revised level of 235k and the predicted reading of 237k. (Event A on the chart.)
Personal income and spending rose in July. Income was up 0.4%, compared to the predicted increase of 0.3% and the zero change in June. Spending increased 0.3% versus the predicted gain 0.4% and the revised increase of 0.2% the month before. Core PCE inflation remained unchanged at 0.1%, matching expectations.(Event B on the chart.)
Chicago PMI was at 58.9 in August, completely unchanged from the July’s level. Analysts had predicted a small decrease to 58.7. (Event C on the chart.)
Pending home sales fell 0.8% in July from June instead of rising 0.4% as experts had promised. The June increase was revised from 1.5% down to 1.3%. (Event C on the chart.) 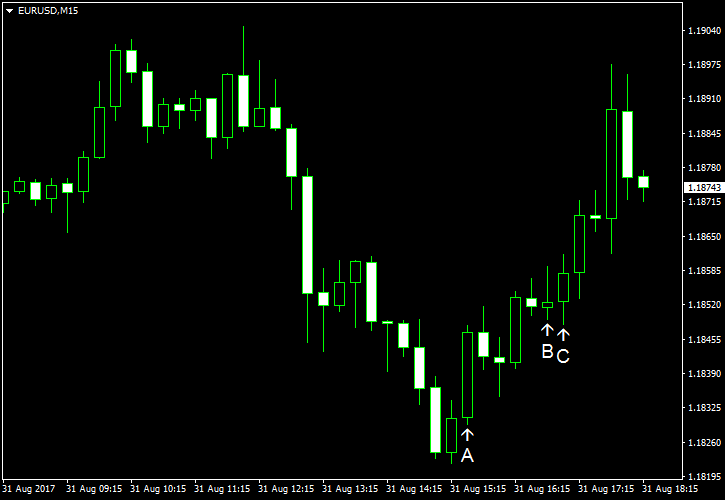