EUR/USD Jumps Despite Positive US Data

EUR/USD jumped today even though all macroeconomic reports released in the United States over the trading session were either good, or at least better than expectations. Nevertheless, the dollar was weak across the board. Analysts attributed that to tumultuous US politics, like the heated debates about the tax reforms or the news about replacement of the Secretary of State.
Initial jobless claims were at the seasonally adjusted level of 238k last week, a bit below the predicted value of 241k and the previous week’s revised figure of 240k. (Event A on the chart.)
Personal income and spending rose in October. Income increased 0.4%, somewhat faster than analysts had forecast (0.3%) and at the same rate as in September. Spending rose by 0.3%, also exceeding the forecast (0.2%) but slower than the September increase (0.9%). Core PCE inflation was at 0.2%, the same as in the previous month and matching market expectations. (Event A on the chart.)
Chicago PMI dropped from 66.2 in October to 63.9 in November. Analysts had predicted a bigger drop to 62.2. (Event B on the chart.) 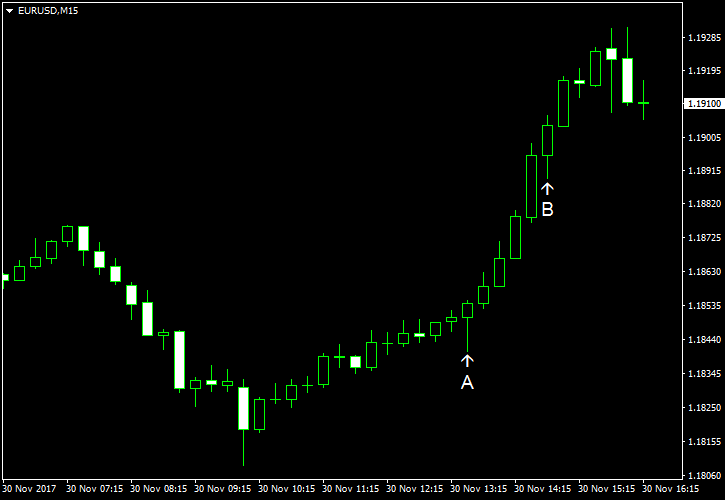