EUR/USD was moving lower for the most part of the current trading session but jumped sharply following the release of the Federal Open Market Committee policy minutes. That was a bit puzzling, considering that the notes portrayed a favorable picture of the US economy and promised further interest rate increases. Some market analysts speculated that the dollar dropped because the minutes did not promise faster pace of rate hikes. As for other releases out of the United States today, the Markit report about manufacturing and services was good, while existing home sales fell for the second month.
Both flash Markit manufacturing PMI and flash Markit services PMI
were at 55.9 in February, up from 55.5 and 53.3 respectively registered in January. Analysts had predicted a reading of 55.4 for manufacturing and 53.8 for services. (Event A on the chart.)
Existing home sales were at the seasonally adjusted annual rate of 5.38 million in January. That was below the median forecast of 5.61 million and the previous month’s value of 5.56 million. (Event B on the chart.)
FOMC released minutes of its January policy meeting. (Event C on the chart.) The notes expressed optimistic outlook for the US economy and signaled that monetary tightening will proceed as inflation moves closer to the 2% target. Yet some policy makers showed concern that inflation may undershoot the target:

A couple of members expressed concern about the outlook for inflation, seeing little evidence of a meaningful improvement in the underlying trend in inflation, measures of inflation expectations, or wage growth. Several members commented that they saw both upside and downside risks to the inflation outlook, and members agreed to continue to monitor inflation developments closely. 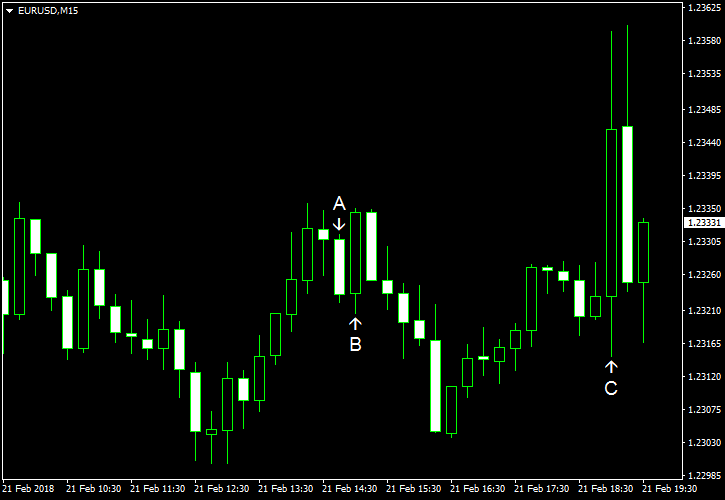