EUR/USD bounced today after losing yesterday’s gains by the end of the previous trading session. The currency pair displayed a significant volatility following the release of the European Central Bank policy minutes before deciding to rally. That was a surprising outcome as the ECB minutes showed that the central bank is not in a hurry to normalize accommodative monetary policy, saying that “changes in communication were generally seen to be premature at this juncture, as inflation developments remained subdued despite the robust pace of economic expansion.” (Event A on the chart.) As for economic releases in the United States, they were rather good but did not help the dollar to overcome the euro.
Initial jobless claims fell to 222k last week from the previous week’s slightly revised level of 229k. Analysts had expected virtually no change to the indicator. (Event B on the chart.)
Leading indicators rose 1.0% in January following the 0.6% increase in December. Experts had promised a smaller increase by 0.7%. (Event C on the chart.)
US crude oil inventories shrank by 1.6 million barrels last week, completely surprising specialists who were expecting an increase by 2.2 million. The stockpiles grew by 1.8 million the week before. Meanwhile, total motor gasoline inventories increased by 0.3 million barrels last week. (Event D on the chart.) 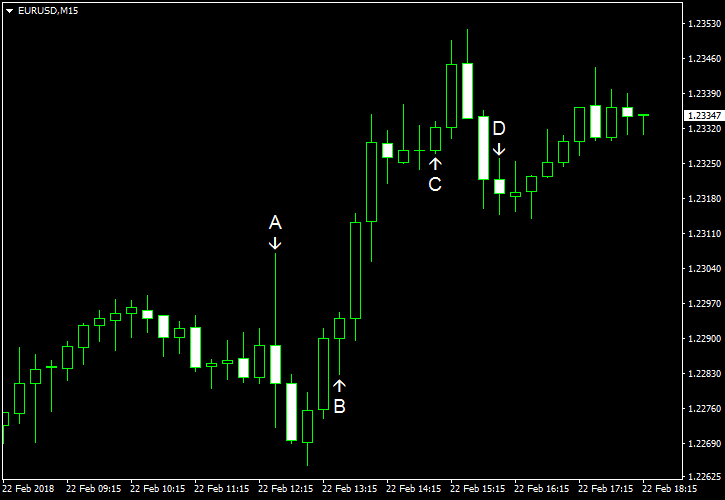