EUR/USD dropped today following the testimony of the new Federal Reserve Chairman — Jerome Powell. He signaled that the Federal Reserve will proceed with monetary tightening, though he did not mention more aggressive pace of tightening. As for US economic data, it was mixed. Nevertheless, the currency pair accelerated its decline after the release of positive indicators, namely the consumer confidence and the Richmond Fed manufacturing index.
Durable goods orders dropped as much as 3.7% in January. That was a bigger drop than 2.4% predicted by analysts. Orders rose by 2.8% in December. (Event A on the chart.)
S&P/ home price index rose by 6.3% in December, exactly as analysts had predicted, but a bit slower compared to the 6.4% growth registered in November. , the index was up 0.2%. (Event B on the chart.)
Consumer confidence rose to 130.8 in February, up from 124.3 in January (downwardly revised from 125.4). That is compared to the median forecast of 126.2. (Event C on the chart.)
Richmond Fed manufacturing index climbed from 14 to 28 in February, while analysts had expected it to stay little changed. (Event C on the chart.)
Yesterday, a report on new home sales was released, showing that they were at the seasonally adjusted rate of 593k in January. It was below the forecast level of 655k and the December revised rate of 643k. (Not shown on the chart.) 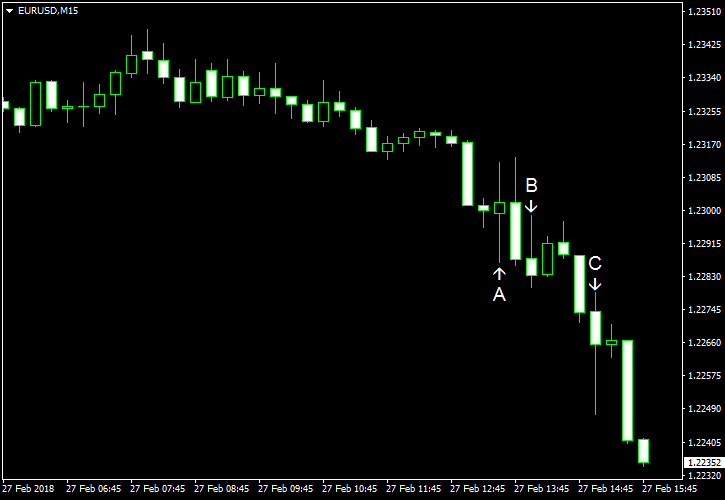