See how retail traders are positioning in GBPUSD as well as other major FX pairs on an intraday basis using theDailyFX speculative positioning data on the sentiment page.

GBPUSD bulls in panic mode with the currency shedding over 2% from post-Brexit highs of 1.4377, now trading at 1.4040 as market pricing for a rate hike next month slips to a 50-50 chance. Soft UK data releases throughout the week saw inflation pulling back to the lowest level in a year at 2.5%, while wage growth remains subdued (2.8% vs. Exp. 2.8%) reducing the necessity for the Bank of England to raise rates. As such, this has been reflected in market pricing which has fallen from a peak of over 80% for a rate rise in May, while expectations for a second hike this year has fallen to as low as 5% (previously around 40%)

The recent mixed bag of data points had been acknowledged by Governor Carney who noted that this will lead to a difference of views on the MPC at the May meeting. The Governor had also been cautious regarding the future path of monetary policy, having stated that there will be a number of rate hikes over the next few years, however not explicitly giving the timing of when normalization will occur. In response, GBP longs continued to be flushed out amid the further unwind in rate hike bets.

BoE’s Saunders provided his usual hawkish rhetoric by dismissing the most recent soft economic data as being impacted by temporary factors (adverse weather conditions), adding that the UK no longer requires as much stimulus. Subsequently, indicating that he will be among the members voting for a rate hike at next month’s meeting. Given that this is in-line with his typical stance, the Pound saw a somewhat muted response with GBPUSD holding 1.4050. The question raised among traders, is whether the most hawkish members (Saunders and McCafferty) will be joined by the majority of the council. 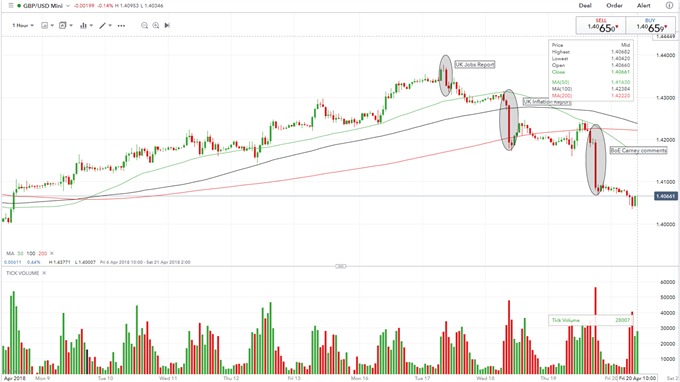