– Bitcoin’s dominance falls back to 38%, the lowest level in one month.

IG Client Sentimentshows retail are 92.8% net-long of Ethereum (ETH) but recent changes cloud the outlook. Download the data for free.

We discuss a range of cryptocurrency charts and price set-ups at our Weekly Cryptocurrency Webinar every Wednesday at 12:00pm.

Ether’s impressive rally continues taking out the $567 swing low made on February 6, with the token now on course to take out resistance at $666, the 61.8% Fibonacci retracement of the September 15 – January 14 rally. ETH is also now trading above the 200-day moving average for the first time since March 18, a bullish impulse which should continue to fuel the rally in the short- to medium-term. A Golden Cross is also on the way, when the 50-day ma moves up through the 200-day ma. Support at $568 and $497 should hold sway. 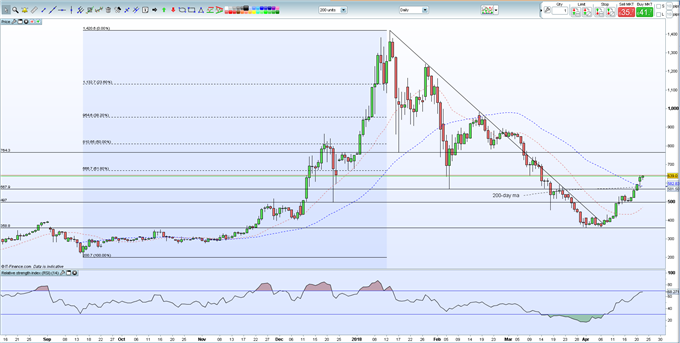 Bitcoin’s market capitalization dominance has slipped to a one-month low as other tokens out-perform the market leader. The last time Bitcoin’s dominance fell was during the altcoin rally in late-December to late-January when record high prices were made. The overall market capitalization rose to just under $400 billion compared to the recent low of $248 billion made just over two weeks ago. 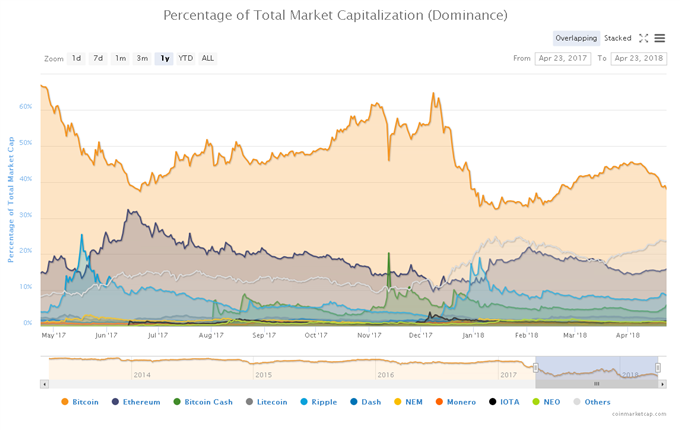 If you are interested in trading Bitcoin, Bitcoin Cash or Ethereum, Litecoin or Ripple we have an Introduction to Bitcoin Trading Guide to help you start your journey.

What’s your opinion on Ether – bullish or bearish? Share your thoughts and ideas with us using the comments section at the end of the article or you can contact me on Twitter @nickcawley1 or via email at nicholas.cawley@ig.com.