EUR/USD acted in contradiction to economic reports released during the current trading session. The currency started its rally after the surprisingly weak German Ifo Business Climate (event A on the chart) and continued to rise even as US data was good for the most part. The possible reason for such a weird behavior was profit-taking after the dollar’s recent rally in preparation for tomorrow’s policy announcement by the European Central Bank.

S&P/Case-Shiller home price index climbed 6.8% in February, year-on-year. The actual increase was bigger than a 6.3% gain predicted by analysts and the 6.4% increase registered in January. Month-over-month, the index was up 0.7%. (Event B on the chart.)

Richmond Fed manufacturing index slumped from 15 in March to -3 in April. That was a total surprise to specialists, who were expecting the index to stay virtually unchanged. (Event C on the chart.)

New home sales were at the seasonally adjusted annual rate of 694k in March, up from the revised February rate of 667k (618k before the revision). The actual value was far better than 625k forecast by experts. (Event C on the chart.) 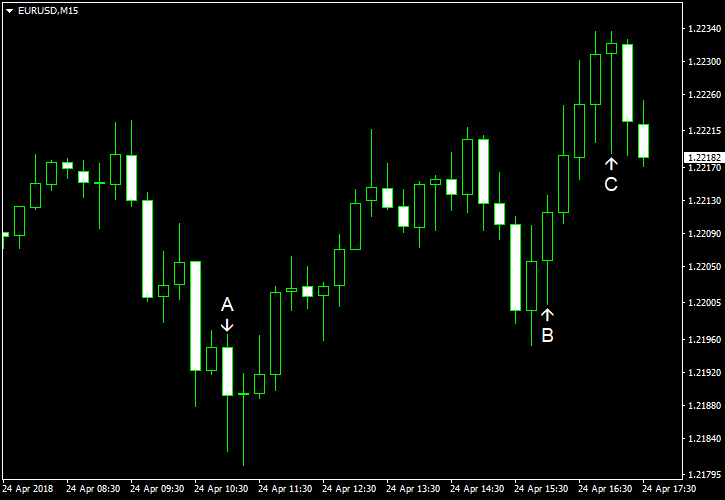