EUR/USD was trading in a range at the start of Monday’s trading but began a decline shortly after German retail sales came out, turning out to be much worse than was expected. (Event A on the chart.) US macroeconomic data was not hot either, but that did not help the currency pair. This week will be full with important releases in the United States, including PMIs, employment data, as well as a Federal Reserve policy announcement.
Personal income and spending rose in March by 0.3% and 0.4% respectively. Experts had predicted an increase by 0.4% for both indicators. The February increase was revised from 0.4% to 0.3% for income and from 0.2% to 0.0% for spending. Core PCE inflation was at 0.2%, the same as in the previous month and in line with market expectations. (Event B on the chart.)
Chicago PMI ticked up just a little from 57.4 in March to 57.6 in April, while analysts had promised a more substantial increase to 58.2. (Event C on the chart.)
Pending home sales rose 0.4% in March, missing the average forecast of a 0.6% increase. The February gain got a negative revision from 3.1% to 2.8%. (Event D on the chart.) 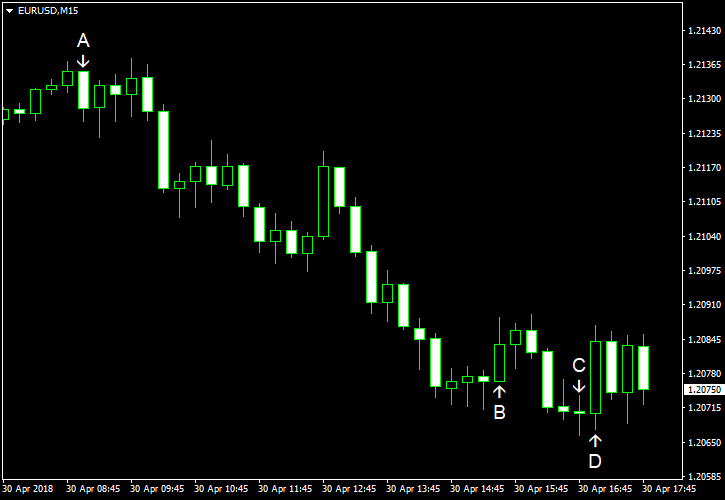