Build confidence in your own NZD/USD strategy with the help of our free guide!

The New Zealand Dollar fell against its major counterparts after May’s RBNZ rate announcement crossed the wires, but NZD/USD could be at risk of rising in the near-term. The central bank left rates unchanged at 1.75% as expected. But that was widely anticipated. Heading into the announcement, 2018 RBNZ rate hike expectations have been fading since the beginning of this year.

This meant that something in today’s announcement further decreased near-term hawkish monetary policy bets. On this front, the Reserve Bank of New Zealand said that it now forecasts rates rising in the third quarter of 2019 versus the second quarter. In addition, it now sees inflation reaching two percent in the fourth quarter of 2020 as opposed to the third quarter.

With that in mind, it seems like the central bank remains patient on adjusting monetary policy for now. This vision was also reflected in local bond markets where front-end government yields declined alongside the New Zealand Dollar. The RBNZ also said that their official cash rate will remain at 1.75% for some time to come.

Meanwhile, new Governor Adrian Orr said that the direction of the next move is equally balanced and could be up or down. Keep in mind that the central bank now has a dual mandate where in addition to targeting stable inflation, it also keeps an eye out for maximum sustainable employment. On this end, the RBNZ said that it is near sustainable levels.

With the RBNZ now behind us, additional risk to the New Zealand Dollar could stem from Thursday’s US inflation report. There, CPI is anticipated to rise to 2.5% y/y from 2.4%. Recently, US economic data has been tending to underperform relative to economists’ expectations. If more of the same here decreases Fed rate hike expectations, then the US Dollar could depreciate against its New Zealand counterpart. 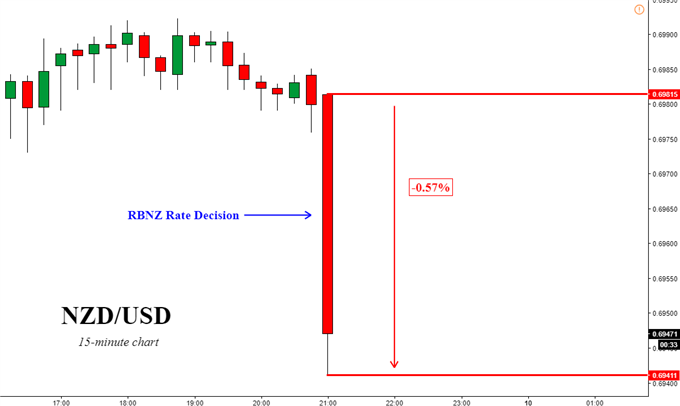 As mentioned earlier, positive RSI divergence in NZD/USD warns that prices may soon turn higher as momentum to the downside ebbs. In addition, the pair finds itself attempting to push below the December 20th low around 0.6952. We shall see if it can manage to close below it.

From here, near-term options-derived support is around 0.6909 followed by 0.6872. If prices turn higher, then they may face options-derived resistance at 0.7017. This level also closely aligns with the descending resistance line which is the blue line on the chart below. 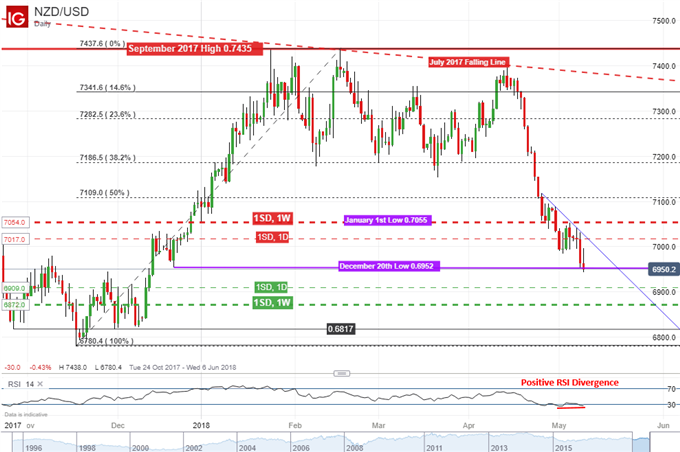