The Pound and FTSE 100 saw a limited price following the slew of economic data points in what was overall a relatively mixed bag of data. UK manufacturing output fell 0.1% in March (2nd consecutive month of declines), which was ahead of expectations for a drop by 0.2%, representing a rise of 2.9% for the year, matching forecasts. Interestingly, the ONS stated that heavy snowfall in March had no significant impact on manufacturing output, consequently suggesting that the underlying economic factors are subdued. UK construction output continued its recent decline with the three months to March representing the largest fall since August 2012. As such, this data provides evidence that uncertainty continues to weigh on business activity and investment, which in turn supports the case that it may not be appropriate for the Bank of England to raise borrowing costs.

The UK trade deficit in March continued to rise with the EU and Non-EU nations with the headline reading at a deficit of £12.29bln, a wider than expected deficit of £11.25bln, which had been driven by increase in imports of electrical machinery, according to the survey.

Focus on the Bank of England’s Super Thursday

The main event for GBP traders will be the BoE Quarterly Inflation Report. At the last QIR in February the BoE had hinted that signs of building wages pressures were likely to prompt a tightening of policy in the near future. However, a raft of weak economic data over the last month (inflation, retail sales and an awful GDP report) has meant that the central bank will be on hold. The inflation report will be scrutinised for clues as to how lasting the BoE sees the recent softness in the UK. GBP bulls will be hoping the Bank of England delivers a ‘hawkish hold’ which in effect could take GBPUSD back above 1.36. 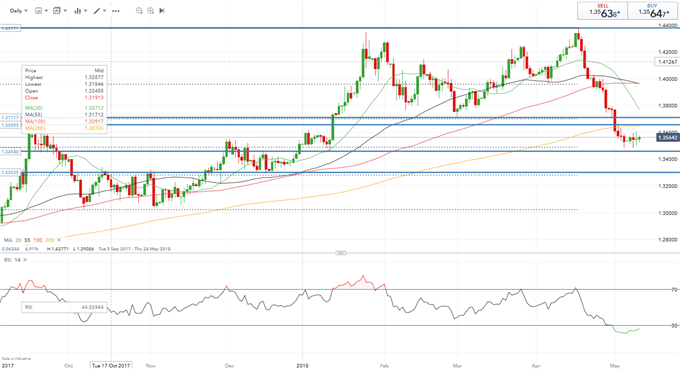 IG Client Positioning shows that 68.7% of GBPUSD traders are net-long with the ratio of traders long to short at 2.2 to 1, find out more here