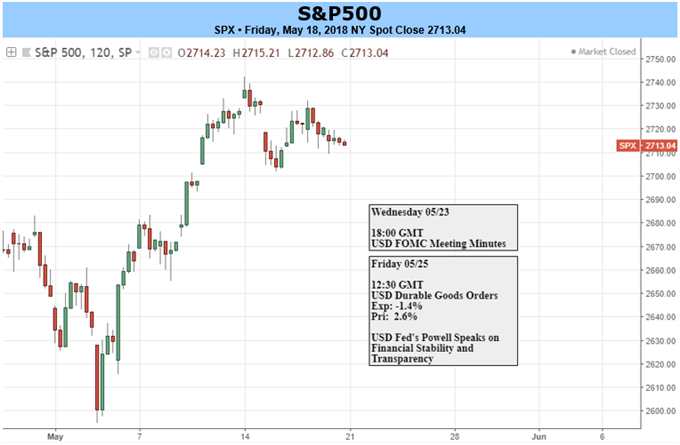 For the intermediate-term technical and fundamental outlook, check out the DailyFX Q2 Forecasts.

Next week, the biggest event on the economic calendar is the release of the minutes on Wednesday from the May FOMC meeting. To end the week, Durable Goods Orders are due out on Friday. Risk trends and any surprise headlines out of Washington will be on the market’s mind.

The S&P 500 hasn’t been provided the same tailwind other global markets have, namely the DAX and FTSE, via sharply depreciating currencies. The move thus far off the most recent test of the 2016 trend-line and 200-day has been relatively tame by comparison to its European counterparts. Last week, we saw some digestion of the thrust the week before, suggesting we may see another push higher soon. A decline back below the trend-line off the highs with momentum will be reason for caution. 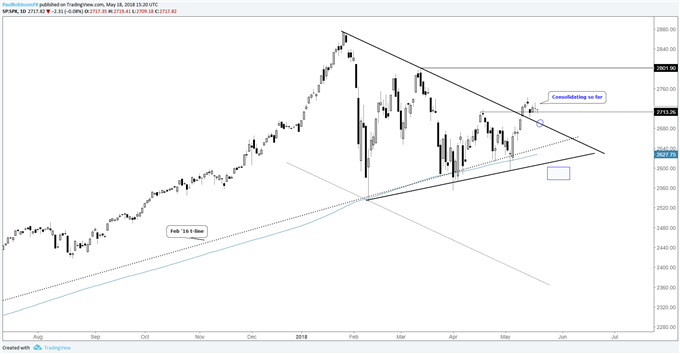 In terms of ‘high’ impact data next week, there isn’t anything on the calendar other than the OECB Economic Forecasts on Friday. There are low-medium risk events, for details see the economic calendar. The euro has been providing a boost for Euro-zone equities, so traders will want to keep an eye on the single-currency as it’s been battered down the past few weeks.

The DAX has been trading higher for nearly two straight months, with only one minor pullback along the way. As it currently stands, there aren’t any substantial resistance levels to contend with until the record high near 13600. This doesn’t mean the market will rise to that point, but it does mean that without levels or bearish price action, for now we’ll continue to give the upward trend the benefit of the doubt. Support on a decline arrives around 12900 and the trend-line off the March low.

Next week, in terms of ‘high’ impact data events we have CPI on Wednesday and GDP on Friday. As is the case with Euro-zone equities and the euro, a similar dynamic is at work with the FTSE and sterling.

The FTSE posted a fresh record closing high on Thursday, and while the trend has shown no signs of abating with the help of a very weak sterling, buying at extended levels doesn’t present the best risk/reward scenario. The thinking on this end is that risk is quickly climbing for the market to experience a correction. How the correction unfolds, aggressively or gradually, will offer clues as to what the next best maneuver may be.