The Euro has been smashed down to five-month lows against the US Dollar, with investors looking nervously to the probable confirmation of a euroskeptic government in Italy on Monday.

The rightist League party and anti-establishment 5-Star Movement have agreed a governing accord which would cut taxes and accelerate welfare spending. This could hack at the heart of the Stability and Growth Pact- the chief document underpinning fiscal responsibility within the Eurozone in the absence of full political union. Coalition members have also been vocal in the past in their opposition to the Euro, although that rhetoric seems to have cooled somewhat in recent days. There are strong doubts that any move to leave the single currency – or even to edge away from it- would get past the Presiden’t constitutional veto.

President Sergio Matterella will be asked to formally approve their government later, although its spending plans are already under heavy fire from across Europe. French Economy Minister Brune Le Maire warned over the weekend that the stability of the Eurozone will be at steady if Rome does not keep to its commitments. Meanwhile in Germany Alexander Dobrindt- a senior member of the Bavarian sister party to Angela Merkel’s conservatives- has said that Germany will not foot the bill for Italy’s new spending plans.

The re-erruption of Eurozone cohesion as a market concern after a long period of dormancy has come at a poor time for the European economy. Softer economic data were already undermining the euro’s early-year strength, and bosting the Dollar. Bond spreads between Italy and Germany have also widened sharply- indicating markets’ increased worries about Italian economic risk.

This story is likely to play out for some time and keep EUR/USD under further pressure.

The single currency has been caught in an accelerating downtrend against the US Dollar since late April on its daily chart. The fall involved has just taken it down through the 76.4% Fibonacci retracement of the rise up from November 2017’s lows to the highs of this year. 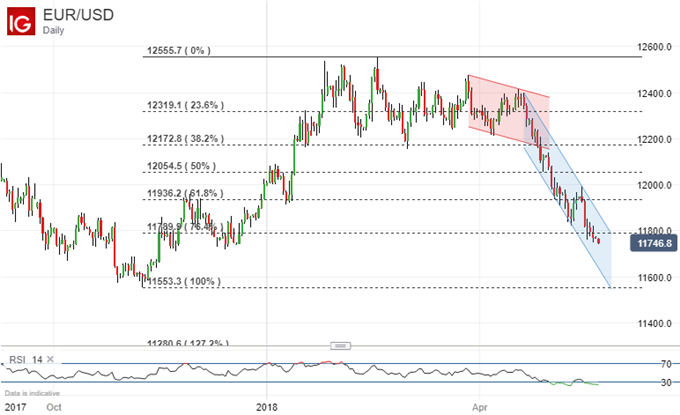