Illiquidity is taking its toll on the FX Markets at the beginning of this week’s session as we head into the US Memorial Day holiday. There were prominent gaps in the Euro and the Japanese Yen, both affected by a couple of notable weekend developments. For the former, it was positive and for the latter, negative. As you would expect then, EUR/JPY had a very significant reaction, gapping almost 0.7% higher as seen below: 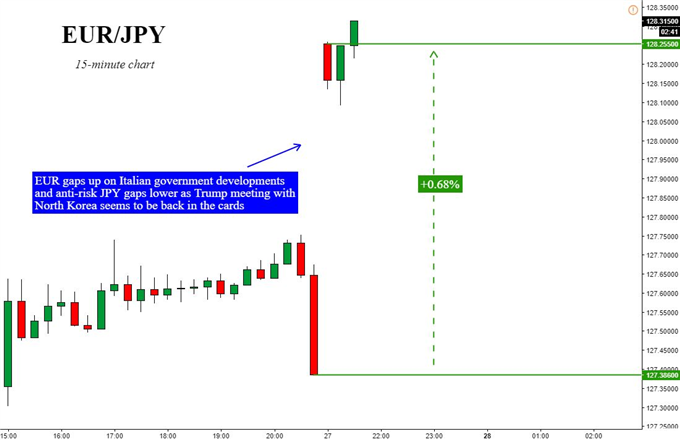 The Euro behaved positively despite developments from Italy on Sunday that the new government formation didn’t go so well. President Sergio Mattarella, whose job it is to name ministers, vetoed the Eurosceptic Paolo Savona as the candidate for finance minister. In response to this, premier-designate Giuseppe Conte gave up on forming an anti-establishment government. While this does raise more uncertainty about the future of Italy and the possibility of another election, the Euro seemed to like that what we saw today was the country demonstrating a check on the populists.

Meanwhile, the anti-risk Japanese Yen succumbed to selling pressure. News on Saturday crossed the wires from US President Donald Trump who revived hopes that the summit between him and North Korean Leader Kim Jong Un could be back in play. Mr. Trump said that they were having ‘very productive’ talks about reinstating the Summit. Last week, those hopes were evaporated due to a surprise cancellation. Just before this week’s trading session got started, the US President further affirmed hopes of a meeting when he said that his team arrived in North Korea to make arrangements for one.

A Look Ahead – Risk Trends in Focus

A lack of key economic events on the docket during the Asian trading session allows for risk trends to continue brewing. Given the holiday in the US, we could keep seeing exaggerated behavior in the markets. If Asian stocks rejoice on revived hopes of a US/North Korea summit, then the anti-risk Japanese Yen could depreciate as the sentiment-linked Australian and New Zealand Dollars outperform.

Last Friday, the Canadian Dollar was the worst performing major. The currency underperformed as crude oil prices fell by the most in a day in almost one year. Confirmation from Saudi Arabia and Russia that they are looking to ease supply cuts by OPEC took its toll on crude oil. For Canada, this can bode ill as mineral fuels (including oil) are a vital source of exports and thus GDP. 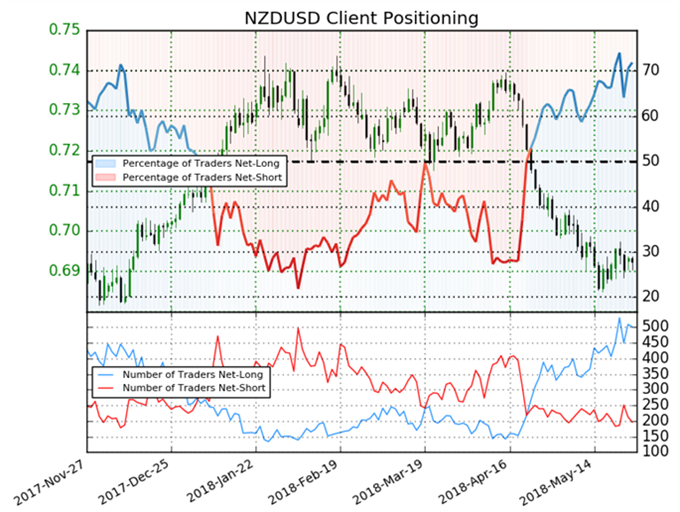