Crude Oil: OPEC tentatively agree to raise production by 1mln bpd, which will represent a real production increase of roughly 600k bpd. In reaction to the announcement, Brent crude futures are trading higher by over $2, given that the increase can easily be absorbed by the market and will unlikely tip the oil balance into negative territory.

CAD: The Loonie has tumbled following the latest Canadian CPI report, whereby the headline figures fell short of analyst estimates. In turn, USDCAD rose to a fresh 1 year high as markets reduced rate hike bets from the Bank of Canada with OIS markets now pricing in a 53% chance of a hike in July from 60%.

EUR: Eurozone PMI data for June had been generally mixed with the service reading rising to a 4-month high at 55, above forecasts, while manufacturing remained stagnant at an 18-month low of 55, which was in line with expectations as increased trade war tariff tensions continued to weigh on the manufacturing sentiment. Overall, the composite reading printed higher than expectations suggesting that the Eurozone is regaining some momentum, with the survey suggesting that GDP will rise by 0.5% in Q2. Subsequently, the Euro has been firmer for much of the morning, despite an initial knock amid reports the SPD party in Germany are preparing for a snap election. 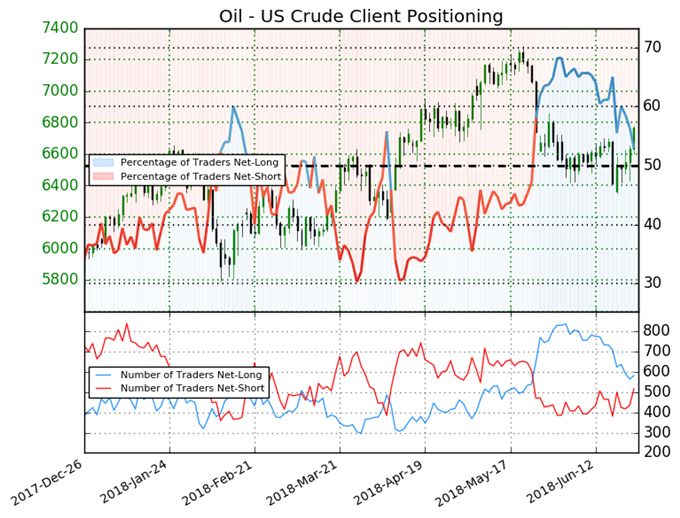 We typically take a contrarian view to crowd sentiment, and the fact traders are net-long suggests Oil – US Crude prices may continue to fall. Yet traders are less net-long than yesterday and compared with last week. Recent changes in sentiment warn that the current Oil – US Crude price trend may soon reverse higher despite the fact traders remain net-long.