RBNZ Holds at 1.75 Percent As Expected, Frets About Trade Wars

Stay up to date with important economic data with our Economic Calendar and gain insight on market moving events like the New Zealand Rate Decision from our Live Webinars.

The Reserve Bank of New Zealand failed to deliver a surprise to markets as they kept the Official Cash Rate at 1.75%, unchanged from the previous meeting. The rate remains at a record low and has not been adjusted since November 2016, when the RBNZ cut the rate by 25 basis points from 2.00% to 1.75%. Since then, the RBNZ has remained relatively dovish and was dealt some positive news this week in the form of trade figures.

In conjunction with the positive trade figures, the RBNZ offered some relatively dovish statements with the release of their rate decision. The RBNZ said they are well positioned to “manage rate change in either direction.” Similarly, they believe it is best to keep rates expansionary for considerable period while the global growth outlook is tempered by trade tensions. On a hawkish note, the reserve bank sees slightly more spare capacity in the economy than expected, but likely remains skeptical because of the expanding trade war.

The New Zealand Dollar rose modestly on Wednesday following the release of the Official Cash Rate decision which pared some of the losses it faced earlier in the session. As for a broader picture, the Kiwi continues its downward trend which began in mid-April. New Zealand growth slowed to 2.7% from 2.9% in the last three months of 2017. While the statements from the RBNZ may have triggered a pullback in NZD/USD, confirmation will be needed before assuming that a reversal is in play. 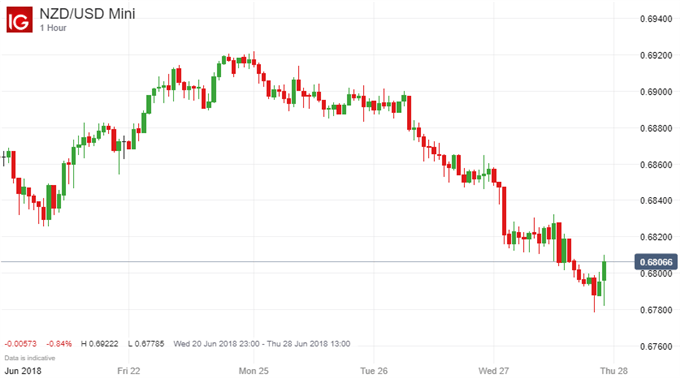 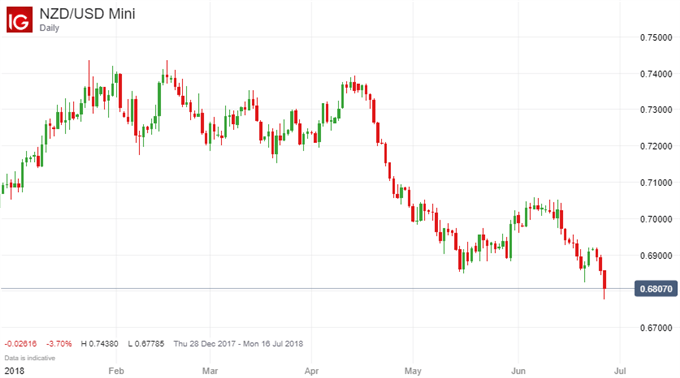