The UK construction PMI reading accelerated to its highest level since November 2017 to 53.1 in June from 52.5, printing ahead of market expectations of 52.5. This follows yesterday’sbetter than expected manufacturing PMI data, adding to the evidence that weak data in Q1 had indeed been due to temporary factors, which has been argued by the Bank of England and as such suggests that a rate hike may be on the horizon. Attention will now turn towardsthe UK service PMI to complete the picture.

In response to the construction figure, GBPedged higher albeit slightly. However, if the data continues to surprise to the upsidethis could possibly reinforce the case for an August rate hike, which will keep the Pound supported in the near term.

IHS Markit noted that the latest increase in construction output marked three months of sustained recovery from the snow related disruption in March. House building remained to be the best performing area of activity, while new orders rose at its fastest pace since May 2017. 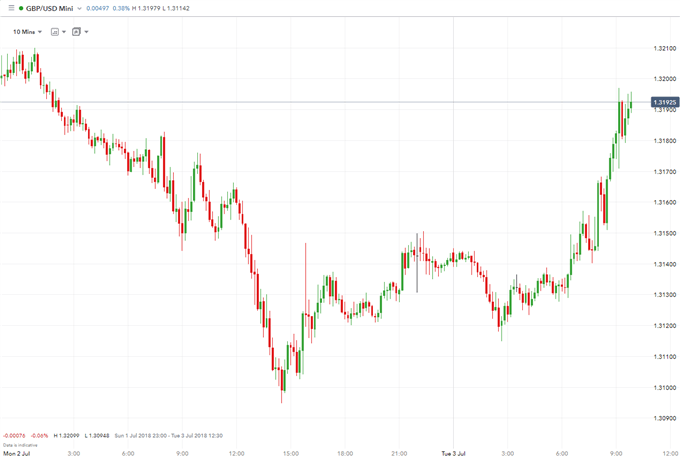 See how retail traders are positioning in GBPUSD as well as other major FX pairs on an intraday basis using the DailyFX speculative positioning data on the sentiment page.

For a more in-depth analysis on Sterling, check out the brand newQ3 FX Forecast Guides