EUR/USD Gets Temporary Correction from Positive US Data

The euro was in a positive trend against its US counterpart during the most part of the trading session today. Later, the uptrend encountered a minor correction fueled with the better-than-expected macroeconomic indicators released by the US agencies. However, the correction failed to reverse the prevailing trend so far.
Retail sales rose 0.5% in June 2018 in the United States. The growth exceeded the median forecast of 0.4%, but what is more important, the May’s growth value was revised positively from 0.8% to 1.3%. Core component of the retail sales added 0.4% in June with a positive revision of the May’s gain from 0.9% to 1.4%. (Event A on the chart.)
NY Empire State Index went down to 22.6 in July. Although it declined from the previous month’s value of 25.0, the current month’s reading was still bigger than the market participants had counted on — 20.3. (Event A on the chart.)
US business inventories went up by 0.4% in May from April. The stockpiles increased 0.3% a month early. The current growth was in line with analysts’ forecasts. (Event B on the chart.) 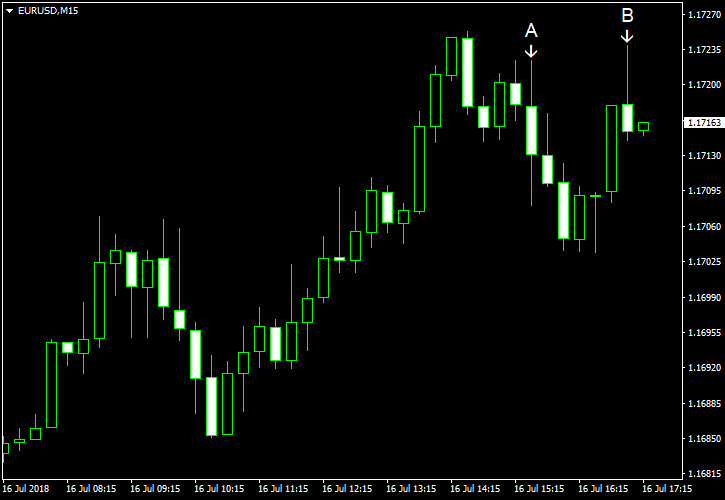