EUR/USD was falling at the start of today’s trading session, but has reversed its movement at 7:00 GMT, and is now trading above the opening level. Macroeconomic data was mixed both in the United States and the eurozone, but that did not prevent the rebound. Market analysts believe that the currency pair will remain volatile till the European Central Bank policy meeting on Thursday. As for US reports, a couple were released today:
Flash Markit manufacturing PMI was at 55.5 in July, little changed from June’s 55.4. Analysts had predicted a drop to 55.1. At the same time, flash Markit services PMI slipped from 56.5 to 56.2, whereas experts had anticipated it to stay unchanged. (Event A on the chart.)
Richmond Fed manufacturing index slipped a bit from 21 in June to 20 in July, but was still higher than the average forecast of 18. (Event B on the chart.)
Yesterday, a report on existing home sales was released, showing a drop to the seasonally adjusted annual rate of 5.38 million in June from the downwardly revised 5.41 million in May. That is instead of an increase to 5.46 million promised by specialists. (Not shown on the chart.) 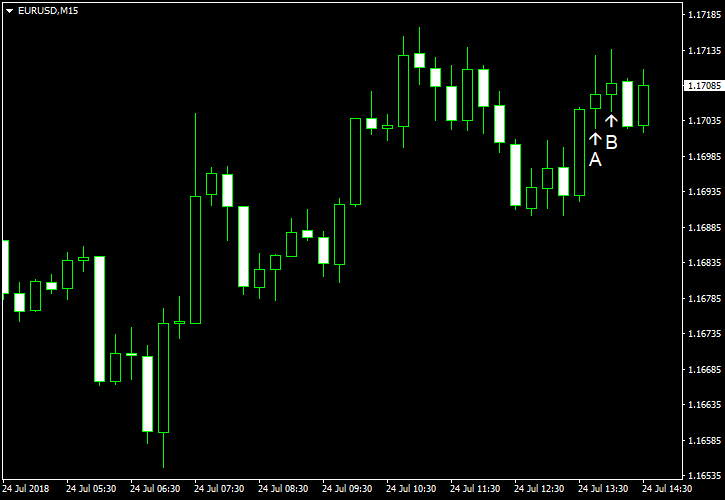