EUR/USD Attempts to Rally on Eurozone Inflation, Retreats to Opening

EUR/USD attempted to rally today, bolstered by the better-than-expected inflation print for the eurozone, but failed and is now trading near the opening level. US reports released over the Tuesday’s session were decent, and some of them were noticeably better than expectations.

S&P/Case-Shiller home price index rose 6.5% in May, slower compared to the 6.7% increase registered in the prior month but faster than 6.4% predicted by experts. (Event B on the chart.)

Chicago PMI jumped to the six-month high of 65.5 in July up from 64.1 in June instead of dropping to 61.9 as forecasters had predicted. (Event C on the chart.)

Consumer confidence advanced to 127.4 in July from 127.1 in June. The actual value was far better than the reading of 126.5 predicted by analysts. (Event D on the chart.)

Yesterday, a report on pending home sales was released, showing an increase by 0.9% in June that followed the drop by 0.5% in May. The consensus forecasts had promised a smaller increase by 0.4%. (Not shown on the chart.) 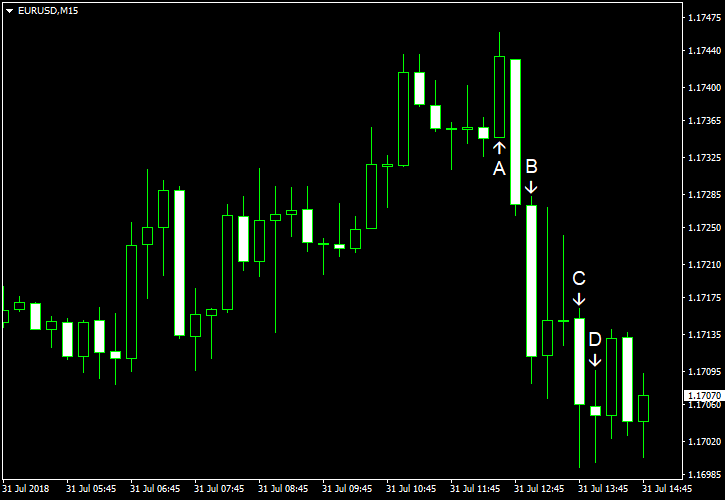