EUR/USD was falling on Wednesday even as most US macroeconomic reports were underwhelming (with the notable exception of employment data). The policy meeting of the Federal Open Market Committee was in focus today, but in reality its impact on the market was limited. While traders did not expect any changes for monetary policy, they were looking for the statement to provide more clues about the FOMC plans. But the statement had not big changes and revelations.
ADP employment rose by 219k in July. The actual reading was noticeably above the forecast increase of 186k and the previous month’s gain of 181k. (Event A on the chart.)
Final Markit manufacturing PMI was at 55.3 in July, down slightly from 55.4 in June. Analysts had expected it to be the same as the preliminary reading of 55.5. (Event B on the chart.)
ISM manufacturing PMI was at 58.1% in July — a noticeable drop from June’s 60.2%. Experts had predicted a smaller decline to 59.4%. (Event C on the chart.)
Construction spending dropped 1.1% in June from May instead of rising 0.3% as forecasters had predicted. The May’s increase got a significant positive revision from 0.4% to 1.3%. (Event C on the chart.)
US crude oil inventories rose by 3.8 million barrels last week, though remained below the five year average for this time of year. That is instead of falling by 2.6 million as analysts had forecast. The increase followed the previous week’s big drop by 6.1 million. Total motor gasoline inventories fell by 2.5 million barrels, but were above the five year average. (Event D on the chart.)
FOMC kept its monetary policy unchanged. Its policy statement did not provide many new insights, but was optimistic in general, saying that “the labor market has continued to strengthen and that economic activity has been rising at a strong rate.” (Event E on the chart.) 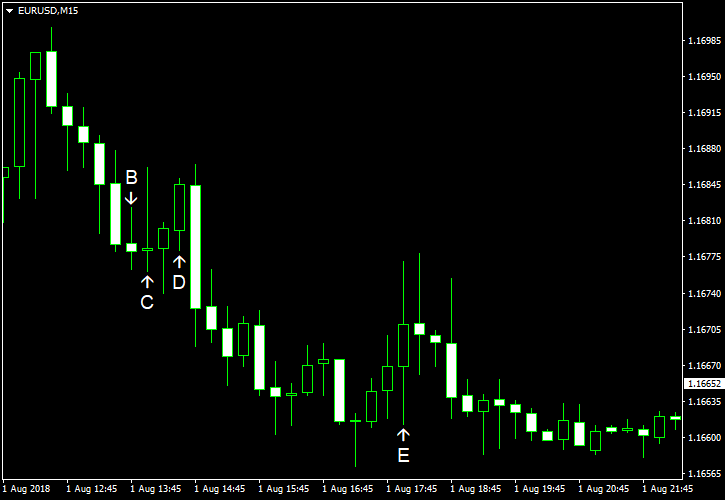