EUR/USD dropped intraday on Wednesday as the euro touched the lowest level in more than a year. By the end of Wednesday’s trading, though, the currency pair managed to recover, staying near the opening level. There were plenty of US economic reported released over the trading session.
Retail sales rose 0.5% in July, seasonally adjusted, exceeding the median forecast of a 0.1% increase. The previous month’s increase got a negative revision from 0.5% to 0.2%. (Event A on the chart.)
NY Empire State Index climbed from 22.6 to 25.6 in August instead of falling to 20.1 as analysts had predicted. (Event A on the chart.)
Nonfarm productivity rose 2.9% in Q2 2018 compared to the predicted increase of 2.4%. The previous quarter’s increase was revised from 0.7% to 0.4%. (Event A on the chart.)
Industrial production rose just 0.1% in July, failing to meet the average analysts’ projection of a 0.3% growth. The June increase got a positive revision from 0.6% to 1.0%. Capacity utilization remained unchanged at 78.1%, in line with expectations. (Event B on the chart.)
Business inventories increased by 0.1% in June, less than analysts had predicted — 0.2%. The May increase was revised from 0.4% to 0.3%. (Event C on the chart.)
US crude oil inventories swelled by 6.8 million barrel last week, instead of falling by 2.6 million barrel as experts had predicted, and were above the five year average for this time of year. The stockpiles decreased by 1.4 million barrels the week before. Total motor gasoline inventories decreased by 0.7 million barrels but remained above the five year average. (Event D on the chart.)
Net foreign purchases were at -$36.5 billion in June. That is compared to the May value of $45.5 billion and the forecast reading of $32.2 billion. (Event E on the chart.)
Yesterday, a report on import and export prices in July was released. Import prices showed no change whereas analysts had promised a small increase by 0.1%. The June drop was revised from 0.4% to 0.1%. Export price fell 0.5% following the 0.2% increase in June. (Not shown on the chart.) 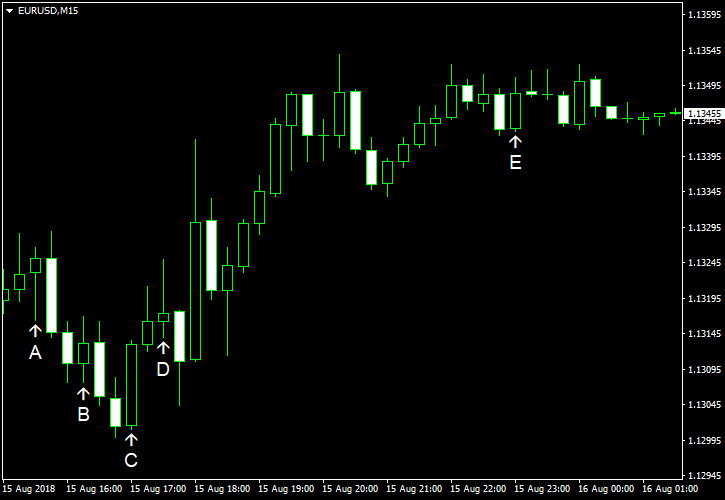