EUR/USD behaved confusingly today, falling in the first half of the trading session, rebounding after the better-than-expected US GDP print, but halting the recovery after poor US housing data.
US GDP increased at the annual rate of 4.2% in Q2 2018 according to the preliminary (second) estimate after rising 2.2% in Q1. It was a faster rate of increase than 4.0% predicted by analysts and 4.1% showed by the advance (first) estimate. (Event A on the chart.)
Pending home sales fell 0.7% in July from June, while analysts had predicted an increase by 0.3%. The indicator edged up 1.0% in the previous month. (Event B on the chart.)
Crude oil inventories shrank by 2.6 million barrels last week, much more than analysts had predicted — 0.7 million barrels. The stockpiles were at the five-year average for this time of year. The week before, the reserves dropped by as much as 5.8 million barrels. Total motor gasoline inventories decreased by 1.6 million barrels but remained above the five year average. (Event C on the chart.) 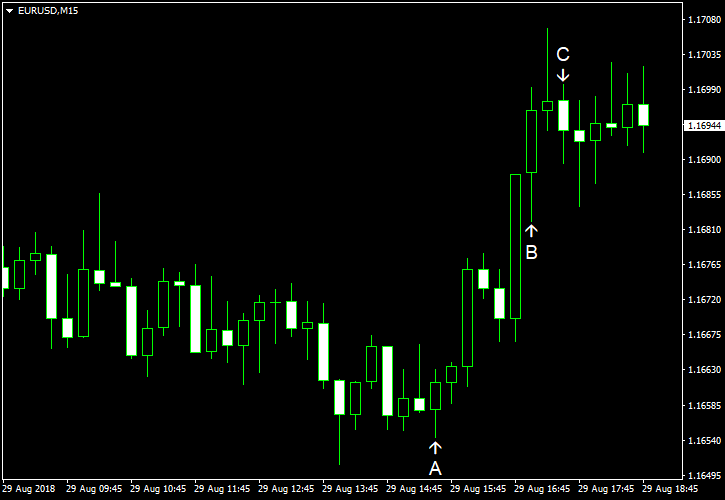