EUR/USD was falling throughout the Wednesday’s trading session and continued to move lower after the Federal Open Market Committee released minutes of its September meeting. The fact that all member of the Committee unanimously voted for an interest rate hike boosted bets on an additional hike in December.
Housing starts were at the seasonally adjusted annual rate of 1.20 million in September, down from 1.27 million in August and close to analysts’ forecasts of 1.22 million. Building permits fell a bit to the seasonally adjusted rate of 1.24 million in September from 1.25 million in August instead of rising to 1.27 million as experts had predicted. (Event A on the chart.)
US crude oil inventories swelled by 6.5 million barrels last week and were above the five-year average for this time of year. The actual increase was bigger than 1.6 million predicted by specialists and was even above the already huge gain by 6.0 million registered in the previous week. Total motor gasoline inventories fell by 2.0 million barrels last week but remained above the five-year average. (Event B on the chart.)
Minutes of the FOMC meeting in September, which resulted in an interest rate hike, showed that members of the Committee voted for the move unanimously. (Event C on the chart.) The minutes confirmed the outlook for additional hikes in the future:

Members expected that further gradual increases in the target range for the federal funds rate would be consistent with sustained expansion of economic activity, strong labor market conditions, and inflation near the Committee’s symmetric 2 percent objective over the medium term. Members continued to judge that the risks to the economic outlook remained roughly balanced. 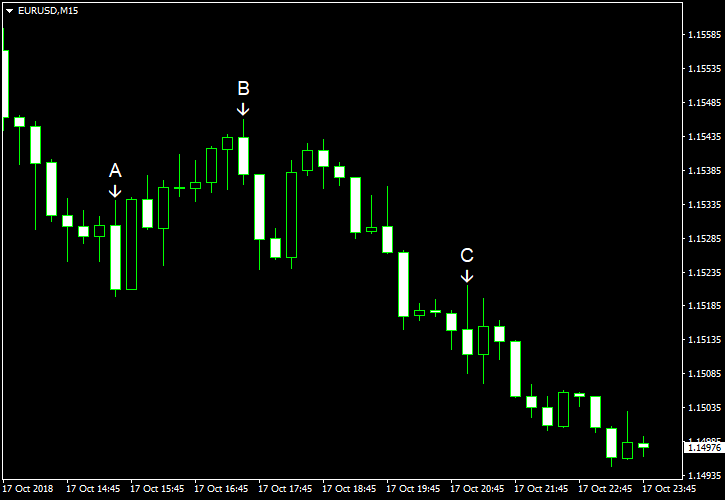