EUR/USD rallied today. The rally accelerated after the release of US employment data, which missed expectations. The market sentiment was negative following the news about the arrest of Huawei CFO Meng Wanzhou, but that did not help the dollar to rebound.
ADP employment rose by 179k in November, down from 225k in October and missing the analysts’ average projection of 195k. (Event A on the chart.)
Nonfarm productivity rose 2.3% in Q3 2018 from the previous three months, matching forecasts exactly, after increasing 2.2% in Q2. (Event B on the chart.)
Trade balance deficit widened to $55.5 billion in October, close to the consensus forecast of $55.2 billion, up from $54.6 billion in September. (Event B on the chart.)
Initial jobless claims edged down from 235k to 231k last week. Nevertheless, the actual value was above the forecasters’ prediction of 226k. (Event B on the chart.)
Markit services PMI was at 54.7 in November according to the final estimate. It was almost unchanged from October’s 54.8. The actual figure was also not far from the preliminary value and the analysts’ estimate of 54.4. (Event C on the chart.)
ISM services PMI rose from 60.3% in October to 60.7% in November instead of falling to 59.1% as analysts had predicted. (Event D on the chart.)
Factory orders decreased 2.1% in October. The actual decrease was bigger than 1.9% predicted by economists. Furthermore, the September’s increase got a negative revision from 0.7% to 0.2%. (Event D on the chart.)
Crude oil inventories slumped by 7.1 million barrels last week though remained above the five-year average for this time of year. The drop was far bigger than 1.3 million forecast by experts. The stockpiles increased by 3.6 million barrels the week before. Total motor gasoline inventories increased by 3.8 million barrels and were also above the five-year average. (Event E on the chart.) 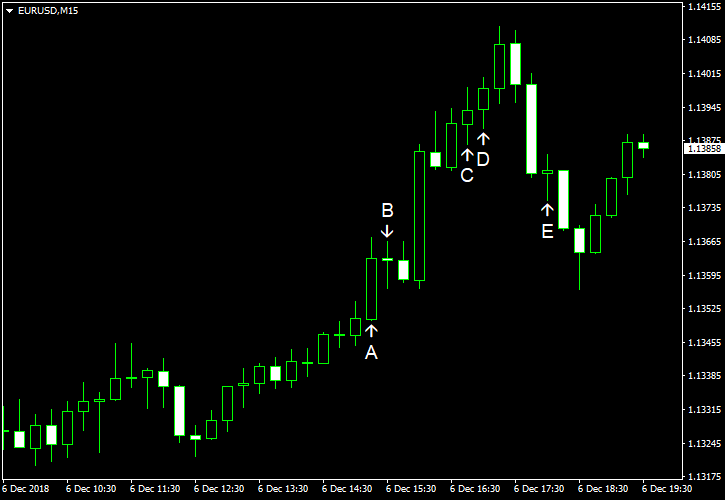