EUR/USD was extremely volatile today, rising ahead of the policy announcement from the European Central Bank, falling sharply after the release, but rebounding to almost flat by the end of the Thursday’s session. ECB President Mario Draghi announced an end to the quantitative easing program but made dovish remarks, sending the currency pair down. US macroeconomic data was mixed today, but with absence of any major releases, it had limited impact on the EUR/USD pair. The Friday’s session should be different, with the retail sales report being the major highlight.
Import and export prices dropped in November. Import prices fell 1.6%, more than analysts had predicted — 1.0%. Export prices declined 0.9%. Both import and export prices rose 0.5% in October. (Event A on the chart.)
Initial jobless claims dropped to 206k last week, seasonally adjusted, from the previous week’s revised level of 233k (231k before the revision). Experts had predicted a much higher number of 226k. (Event A on the chart.)
Treasury budget logged a deficit of $204.9 billion in November, up from $100.5 billion in October. Economists had promised a smaller shortage of $193.5 billion. (Event B on the chart.) 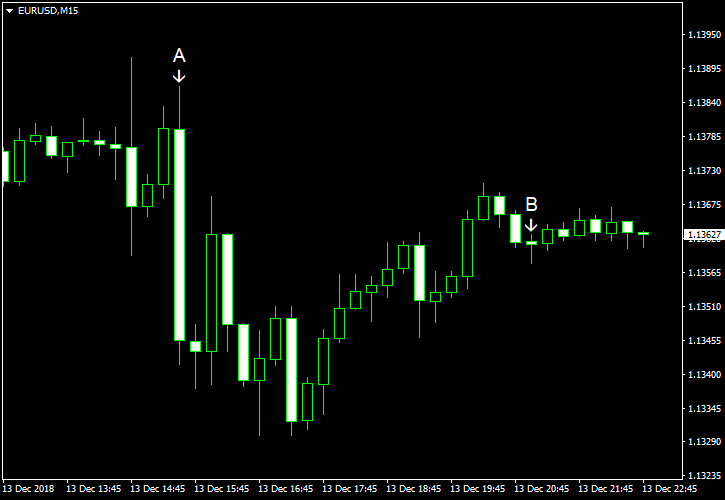