EUR/USD was rising gradually today ahead of the Federal Open Market Committee policy meeting but retreated sharply after the event. While the FOMC hiked its key interest rates, that was already expected and priced in. What really grabbed traders’ attention were the statement and the economic projections, especially for monetary policy. And the fact that they turned out to be not as dovish as markets had expected caused the US dollar to bounce sharply
Current account deficit widened to $124.8 billion in Q3 2018 from $101.2 billion in Q2 2018, matching forecasts. (Event A on the chart.)
Existing home sales rose to the seasonally adjusted rate of 5.32 million in November from 5.22 million in October instead of falling to 5.20 million as analysts had predicted. (Event B on the chart.)
US crude oil inventories shrank by 0.5 million barrels last week but remained above the five-year average for this time of year. The decrease was smaller than analysts had predicted (2.7 million barrels) and the one registered the week before (1.2 million). Total motor gasoline inventories rose by 1.8 million barrels and were also above the five-year average. (Event C on the chart.)
FOMC raised the target range for the federal funds rate by quarter of percentage point to 2.25%-2.5%. (Event D on the chart.) As for the plans for monetary policy in the future, the statement said:

The Committee judges that some further gradual increases in the target range for the federal funds rate will be consistent with sustained expansion of economic activity, strong labor market conditions, and inflation near the Committee’s symmetric 2 percent objective over the medium term.

Some analysts interpreted the addition of the word “some” as a sign that US policy makers are preparing to stop raising borrowing costs. Yet the economic projections showed that the Committee is planning two hikes in 2019. While it was down from three hikes in the previous projections, the number was still above expectations of many experts, who were counting on one hike or even no hike at all next year.
Yesterday, a report on housing starts and building permits was released, showing that both increased in November. Housing starts were at the seasonally adjusted annual rate of 1.26 million, up from 1.22 million in October, and building permits were at 1.33 million, up from 1.27 million. Forecasters had predicted a smaller values — 1.23 million for housing starts and 1.27 million for building permits. (Not shown on the chart.) 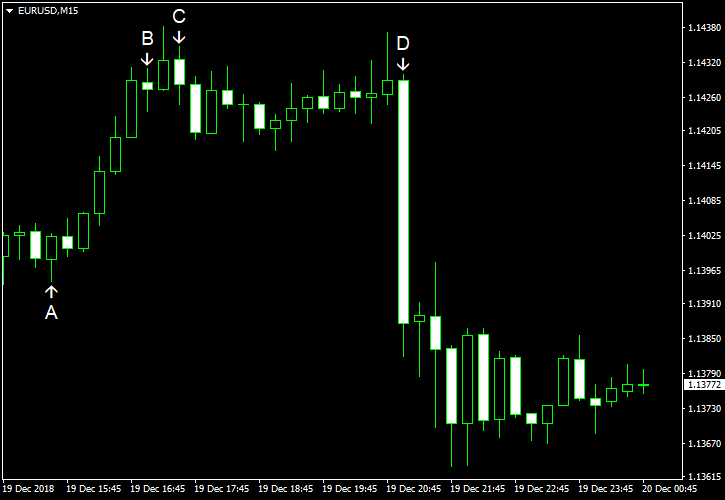