Happy Holidays, traders! It is time to discuss my own Forex trading performance and ask you how your trades fared in 2018. I must admit that the year was a complete disaster for my chart pattern trading strategy. It started quite well with two nice profitable trades closed in January and February but then it turned totally nuts with 14 losing trades in a row — my biggest losing steak so far. The streak ended after a quick winning trade in oil CFD. The overall result for the year was -7.5% — the worst year since I have started to actively track my performance. 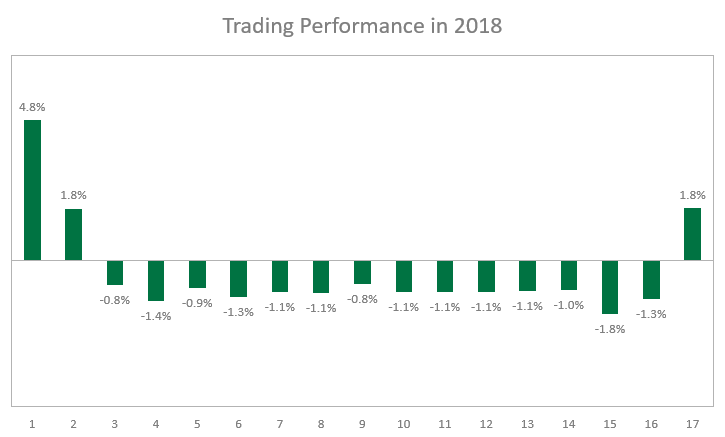 Currently, I have no open trades that would carry over into 2019, so the yearly performance can be analyzed in a straightforward manner.
Analysis
The good thing about tracking your trades, even if the majority of them are losses, is that you can look at your trading journal and analyze what happened. And when I look at the positions that I closed in 2018, I see four trades in gold CFD — two symmetrical triangles and two bullish pennants. Both bullish pennants were inside a long-term downtrend for the metal. Perhaps, there is a lesson in this — do not trade short-term pennants/flags when they appear as corrections of major trends. By the way, there were two other bullish pennants in 2018 — CAD/JPY and GBP/CHF, both on daily, both losers — and both have formed inside longer-term downtrends.
Although two of the three winning trades in 2018 have been symmetrical triangles, five other examples of this chart pattern have resulted in losses during the period. There was nothing apparently wrong about these patterns — they all seem pretty normal. A deeper look into the price action following the breakout suggests that in four out of five cases, the trades could be closed in profit should I have placed the stop-loss to the opposite base angle of the triangle — that is, instead of the high/low of the breakout candle. This would certainly have adverse impact on the
risk-to-reward ratio of these trades, but it would turn most of them into winners. I am still not sure whether I will embrace this change in my subsequent symmetrical triangle trades, but it is definitely good food for thought.
To sum it up, I would say that my poor trading performance in 2018 was caused by a combination of overtrading with pennants and a potentially suboptimal choice of stop-loss for symmetrical triangles.
Poll
And how successful was your trading for the year?